Sergio Perez says he can understand why drivers have struggled to adjust to Red Bull's Formula 1 car concept, finding it "quite different" to what he has previously driven

Perez has sampled Red Bull F1 machinery for the first time this week, completing a run in the 2019-spec RB15 on Tuesday before completing a filming day shakedown in the new RB16B on Wednesday.

The Mexican has joined Red Bull on a one-year deal after leaving Racing Point at the end of last year, replacing Alexander Albon.

It marks Perez's first time racing for a front-running team since his single-season stint with McLaren in 2013, handing him the chance to add to his shock maiden F1 victory in Sakhir last year.

But Red Bull's cars have traditionally been tricky for drivers to adjust to, with the RB16 proving skittish for both Albon and team-mate Max Verstappen in the early part of last year.

Asked by Autosport how he has found adjusting to a new car concept both during the filming day and in the simulator, Perez noted there were definite differences to what he has previously driven.

"It is quite different, I can already spot the differences," Perez said.

"[You can feel] the strong front end that the car has and so on, those are things that as soon as you jump into the car and the simulator. You can spot them out fairly quickly."

Perez is Verstappen's fourth team-mate in the last four years, replacing Albon who was dropped after just one full season in the Red Bull seat. 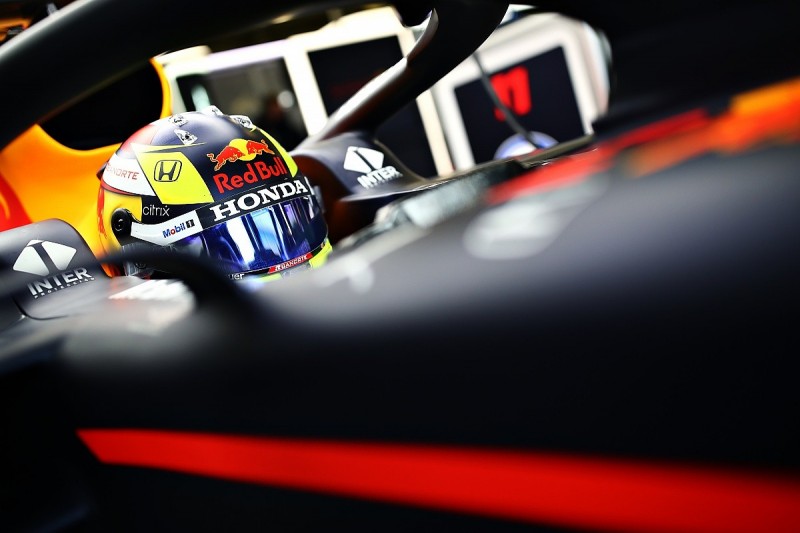 Albon himself had been drafted in as a replacement for Pierre Gasly, who lost the seat after just 12 races in 2019 amid similar struggles in matching Verstappen.

Perez acknowledged from his initial running for Red Bull that he could understand why his predecessors may have struggled to adapt to it.

"I think it's obviously a car [that] I can see why not every driver can adapt to it," Perez said.

"I can already spot that. In terms of the timing that I need, to know exactly where to set up the car, where to take the final tenths out of it.

"That comes with experience in the car, and learning how to make the most out of it. That's something that will come just once I fully understand. I hope it doesn't take me too long."

Although Perez was unwilling to draw any firm conclusions from his brief shakedown run-out in the RB16B at Silverstone, conducting on demonstration tyres, he felt there were positive signs in the car for the year ahead.

"It's a filming day, so it's all about trying to get myself comfortable in the car," Perez said.

"I can kind of already see that there is potential in it, and I can spot some of the differences.

"It's on test tyres and so on, so I don't want to draw any conclusions.

"But I can just see there is some good potential in the car."

Saudi Arabia GP on calendar for at least a decade, says F1