Sergio Perez believes incidents with Nikita Mazepin and Lando Norris cost him a possible sixth-place finish in the Formula 1 Dutch Grand Prix after starting in the pitlane.

Perez dropped out in Q1 at Zandvoort on Saturday after failing to get a final lap in the opening session, prompting Red Bull to take a fresh power unit that resigned the Mexican to a pit lane start.

The Mexican managed to fight his way back to eighth place at the chequered flag after a late stint on soft tyres saw him pass Daniel Ricciardo, Lando Norris and Esteban Ocon to claw his way into the points.

PLUS: The Mercedes tactics Verstappen had to overcome to win at home

But Perez had been forced into an early pit stop after flat-spotting his hard tyres when trying to pass Haas driver Mazepin, switching to mediums after only eight laps.

Perez then had a run-in with Norris in the closing stages when trying to pass around the outside at Turn 1, resulting in contact between the two drivers.

While Perez felt the team had “managed to minimise the damage” after his qualifying setback, he believed that a top-six finish would have been on the cards without the two incidents.

“Our race was really complicated a lot,” Perez explained.

“Apart from that it was a sensible race, apart from the touch with Lando as well, which cost a lot of right-hand side of the floor, it took away and I think that also cost us P6.

“But the positive is obviously Max [Verstappen] won the race for the team, and we have our new engine so we're good for the rest of the year.”

Perez felt he had “nowhere to go” thanks to Norris’s move at Turn 1, calling it “unnecessary”, but the McLaren driver made clear he was not willing to simply give up the position without a fight. 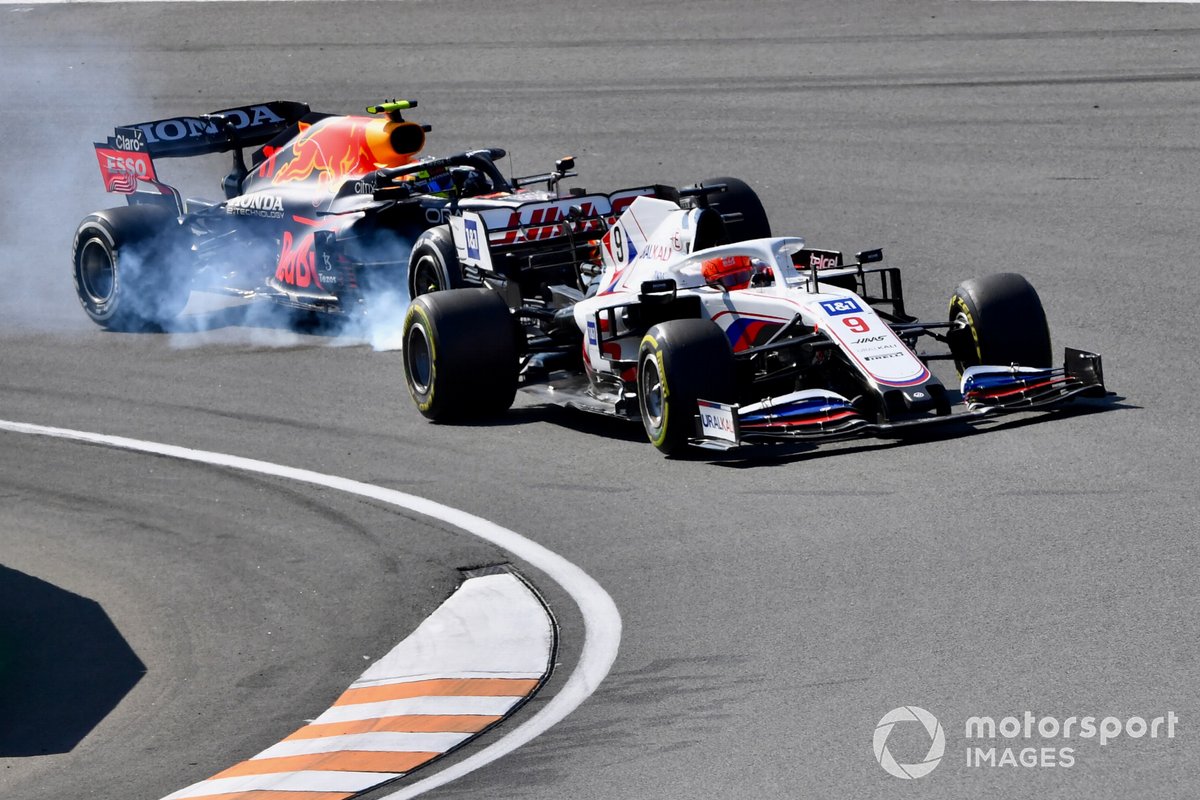 “I'm not going to make his life easy, you know?” Norris said.

“I think we can just be happy with racing him. He's in a Red Bull, he's in the quickest car on the track.

"I think any driver, no matter who it is, no matter if we were just purely racing against Max or Lewis [Hamilton] or whoever on track, you've got to treat them all the same.

“I’m not going to make his life easy because I want those points just as much as he does.

"So yeah, I tried, I squeezed him a little bit but I didn't force him all the way off the track or anything like that so we both fought each other hard.

“He backed out quite a bit into Turn 1 and I just didn't want to give him a lot of room.

"I gave him enough, just not all the world. He still managed to get past, none of us crashed, and I think he still went on to overtake another one, so yeah, nothing to say.”

“He was the only guy I could see really overtaking,” Horner said.

“To come back there into the points [and score] important points for us today, yeah, it was a very strong race for him.”

Valtteri Bottas to drive for Alfa Romeo F1 team in 2022