Sergio Perez feared his intermediate Formula 1 tyres would have "exploded" if he had done one more lap in Sunday's Turkish Grand Prix, but held on to finish second

Perez ran in second place through the opening stages of the race behind team-mate Lance Stroll amid slippery and wet conditions at Istanbul Park.

Although Perez was powerless to keep race winner Lewis Hamilton behind him, the Mexican soaked up late pressure from Ferrari drivers Charles Leclerc and Sebastian Vettel to hold on to second place at the chequered flag.

"I told my team on the radio, I think one more lap on those tyres and they would have exploded," Perez said.

"The vibrations were extremely bad towards the end. But I think it also made that race, looking after them in the beginning [and] towards the end with drying conditions.

"The team did a fantastic job in terms of strategy reading the race. I think Lewis today was extremely strong, and towards the end we died, but we managed to get a good result."

Perez had initially faced pressure from Red Bull's Max Verstappen following the switch from wet to intermediate tyres, only for the Dutchman to spin after running wide at the exit of Turn 10 when trying to take the position. 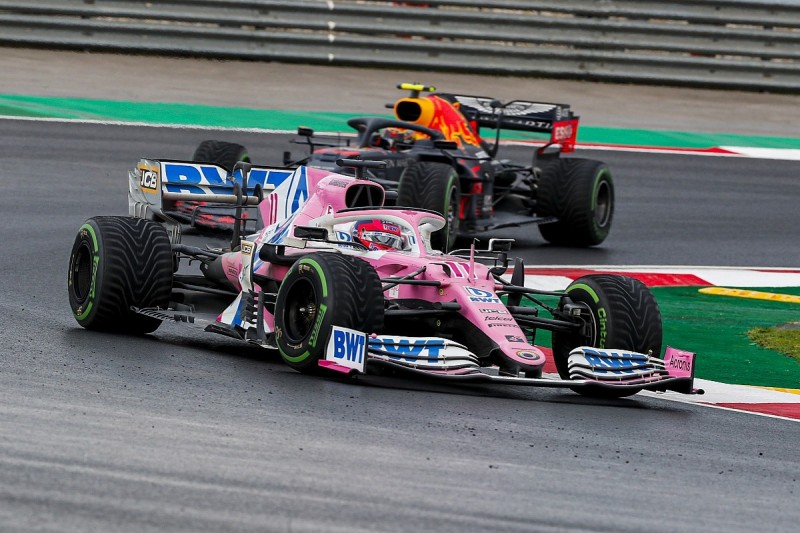 A mistake on the last lap by Perez allowed Leclerc to momentarily pass on the run down to Turn 12, but the Ferrari driver ran wide and conceded the position with two corners to go.

"I couldn't see anything on my mirrors," Perez said, reflecting on his battle with Verstappen.

"My mirrors were full of fog, so my engineer was basically telling me the gaps and so on. And then all of the sudden, I saw Max like running wide and he disappeared.

"The other one was with Charles. I wasn't aware that he was so close to me. So in the final lap it was pretty good battle with him. He overtook me into Turn 10, and then I overtook him back into 12.

"It was a chaotic race, but a strong result for us."

It marked Perez's best result for the Racing Point team in both its current guise and previously as Force India, and was his highest finish since the 2012 Italian Grand Prix.

Perez has only three races remaining with Racing Point before leaving at the end of the season, and is currently without a seat for next year.

Asked if the result felt like a great leaving present, Perez replied: "I think as always you know you have to be delivering weekend after weekend.

"You are as good as your last race, so it's important to finish on a high. The rest is not in my hands."