Although he missed FP2 with an electrical issue and was still eliminated from the first part of qualifying, Austria was Palmer's most competitive showing of the season.

He rose from 16th on the grid to 11th, finishing 0.6 seconds behind the Williams of Lance Stroll and beating Hulkenberg by 25s in the race as the German suffered an anti-stall problem at the start and struggled for pace thereafter.

Palmer told Autosport part of his attempt to improve his season was to change his driving "towards more how Nico's driving".

"The cars are very sensitive to the inputs this year with the high downforce," he explained.

"I've always driven in a certain way, which is not working very well with how the car's been.

"[Now] it's kind of closer to what Nico's doing and adapting myself to try and drive slightly differently.

"He's got more experience in Formula 1 and has driven a lot of different cars and has a good feel for this car already.

"I just needed to adapt a little bit and that's what I'm still trying to do to improve."

Palmer said the work he had put in helped him start strongly in Austria, where he was much happier with his RS17 from the first practice session.

"Obviously the performance has been disappointing and I've been looking hard at what I can improve," Palmer said.

"I came here with a slightly different mentality and I think it's helped.

"I've been really happy and the race was as good as it could have gone.

"I was happy with the car and able to attack like I've known in the past.

"It feels like a bit of a breakthrough weekend." 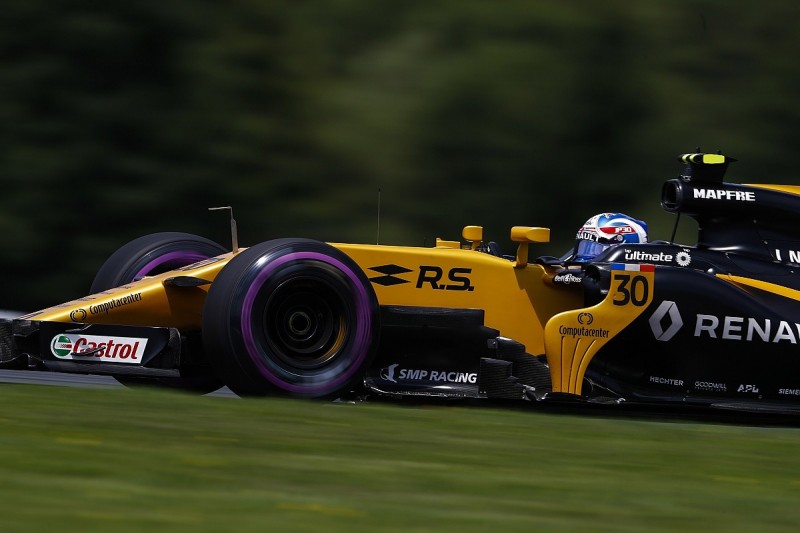 Austria was the third time in four races Palmer has finished 11th, having been 1.3s behind Kevin Magnussen in Monaco and 1.1s behind Romain Grosjean in Canada.

He ran one place outside of the points in Austria from lap 29 of the 71-lap encounter, which Renault Sport boss Cyril Abiteboul said was "encouraging but a bit frustrating".

"It starts with good reliability on Friday, and a better Saturday.

"He knows that he lost a couple of tenths and the opportunity to be in Q2, which would have allowed him to start from a better position on Sunday."

Palmer felt he would have finished in the top 10 if he had joined Hulkenberg in the second part of qualifying.

"We had the car in a good place and I was driving better than I have done so far," he said.

"It was just that qualifying lap, which is where I need to work on."