Rosberg was fractionally faster than Mercedes team-mate Lewis Hamilton during the first runs in Q3, taking provisional pole by 0.076s.

Rosberg had just improved by 0.007s in the first sector when Kvyat put a wheel off the track turning in to the kink after the Degner Curves.

His Red Bull was spat off into the barrier on the outside, tearing off the left-hand side of the car before digging into the gravel trap and rolling over.

The Russian walked away from the wreckage but the accident brought out the red flags and halted any hopes for Hamilton of striking back, thus Rosberg confirmed his first pole since May's Spanish Grand Prix, and only his second all season. 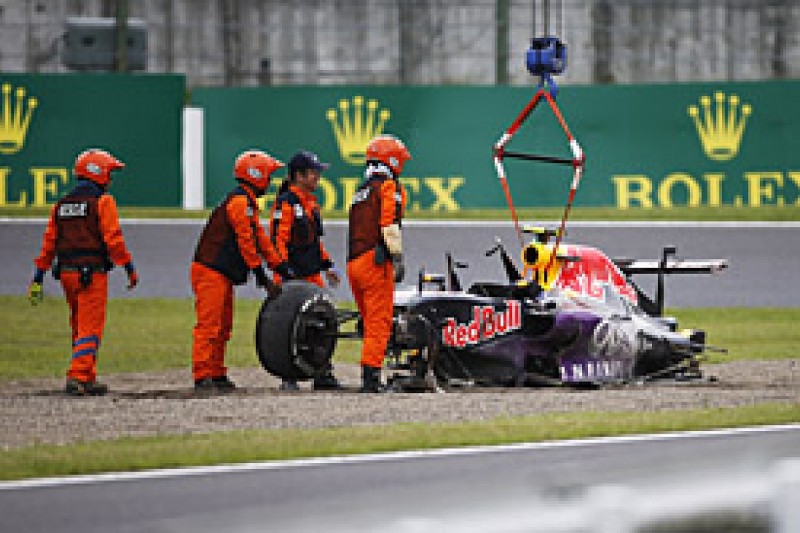 The Williams of Valtteri Bottas set the third fastest time, just under four tenths adrift of Hamilton, and ahead of Sebastian Vettel's Ferrari.

Felipe Massa made a mistake at the chicane on his best lap and wound up fifth, just 0.010s clear of Kimi Raikkonen, who complained of too much understeer in his Ferrari.

Daniel Ricciardo's Red Bull and Romain Grosjean's Lotus rounded out the top eight, ahead of the Force India of Sergio Perez and Kvyat, who both failed to set a time in Q3.

The second Force India of Nico Hulkenberg, Carlos Sainz's Toro Rosso, and the sister Lotus of Pastor Maldonado all failed to make the top-10 shootout after a close battle at the end of Q2.

Hulkenberg lost out to Grosjean by 0.112s, dropping the crucial time in sector one, while Sainz was slow in sector two (the Degners, the hairpin and Spoon), which meant he missed the cut by almost two tenths.

Maldonado was just 0.044s further back in 13th, followed by Fernando Alonso in the best of the McLarens, and Max Verstappen, who failed to take part in Q2 after stopping on track in the first part of qualifying when his Toro Rosso broke down with electrical problems.

Verstappen's stranded car on the exit of the hairpin spoiled any hopes Jenson Button's McLaren had of making it through to Q2.

The 2009 world champion earlier complained of problems with in correct engine settings on his first run, which required him to pit.

After aborting his second run because of the yellow flags, Button told his team firmly on the radio: "in the position we're in we cannot make any mistakes" after winding up 16th, just under two tenths adrift of team-mate Alonso.

Sauber endured an even worse session, as both drivers had to abort their final flying laps.

Felipe Nasr complained: "I was on a good lap!" after qualifying 18th, less than a tenth behind team-mate Marcus Ericsson, who spun under braking at Spoon Curve on his first run, after clipping the artificial grass with his right rear wheel.

Will Stevens won the private battle of the Manor Marussias by default, after team-mate Alexander Rossi aborted his first run because of Ericsson's spin, and had his second attempt hindered due to the yellows for Verstappen's car.

Renault to step in and save Lotus F1 team from administration