Five days after winning his maiden world title, Rosberg announced his unexpected retirement from F1 on Friday at the FIA Prize Giving.

The 31-year-old had only signed a new, two-year deal set to keep him with Mercedes until the end of 2018 in July.

Mercedes junior Pascal Wehrlein has just completed his first season in F1 with Manor, but motorsport boss Wolff says Mercedes will not rush into a decision on who partners Lewis Hamilton.

"For the team, this is an unexpected situation but also an exciting one," he said.

"We are going into a new era of technical regulations and there is a free Mercedes cockpit for the seasons ahead.

"We will take the necessary time to evaluate our options and then find the right path for our future."

Rosberg joined Mercedes when it returned as a works team in 2010, after spending the first four seasons of his F1 career with Williams.

Alongside Michael Schumacher and then Hamilton since 2013, Rosberg has won 23 grands prix and taken 30 pole positions.

"With Mercedes, Nico has been a relentless competitor, bouncing back from his tough times in an inspirational way, and he earned the respect of the sport with his tenacity, his fighting spirit and his grace under pressure," Wolff said.

"Since 2010, he has poured competitive energy into our team and we have grown stronger because of it. 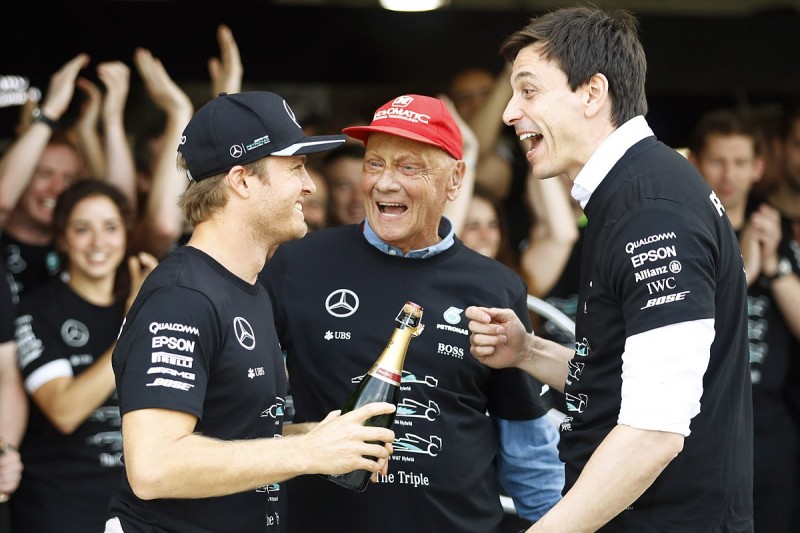 "We simply say 'thank you' for the incredible contribution he has made to our success, alongside two of the all-time great drivers, Michael and Lewis."

Wolff said he immediately accepted Rosberg's decision to retire, which was made for family reasons, and paid tribute to his outgoing driver.

"This is a brave decision by Nico and a testament to the strength of his character," Wolff said.

"He has chosen to leave at the pinnacle of his career, as world champion, having achieved his childhood dream.

"The clarity of his judgement meant I accepted his decision straight away when he told me.

"It's impossible to capture the essence of a person in a few short words.

"But Nico has a special combination of natural talent and fighting spirit that have brought him to where he is today.

"Throughout his career, people have thought he was on a golden path to success just because his father was a world champion.

"In fact, in some ways that made the challenge greater - and meant he had to fight even harder with the weight of expectation on his shoulders."