Di Montezemolo's 23-year spell as Ferrari president came to an end in 2014 after escalating tensions with Marchionne, who was and remains the boss of Ferrari's parent company Fiat/Chrysler.

Vettel and Marchionne have been unable to end Ferrari's title-less run, which stretches back to 2008 for a constructors' success and '07, with Kimi Raikkonen, for a drivers' championship win.

Speaking at last week's launch of a new Michael Schumacher exhibition in Germany, di Montezemolo said: "I'm sad to see that Marchionne is very jealous from the past.

"This is bad, because to be jealous of the past it means you have something strange in the mind.

"Of course Ferrari is always here, and I hope now will again be in a condition to win, because Ferrari needs to win, and for Formula 1 Ferrari is very important.

"I'm still in contact with a few people there, but after 24 years, I was so lucky to win with Niki [Lauda], with Michael, with Kimi, 19 championship titles, it's enough." 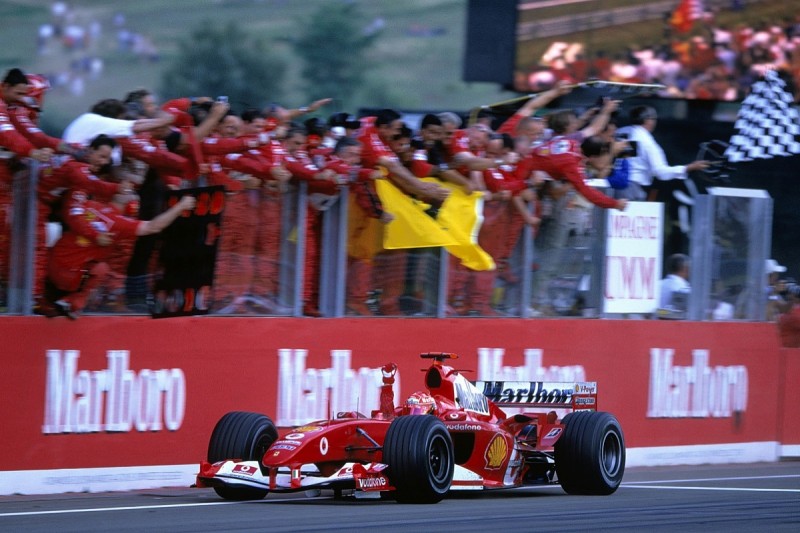 Di Montezemolo attended the Cologne event to lend his support to the new display, which features significant elements from Schumacher's private collection.

He said it was seven-time champion Schumacher, still recovering from the head injury sustained in a skiing accident in 2013, who first encouraged Ferrari to evaluate Vettel.

"I think of Michael very often, I think of him every race weekend still," said di Montezemolo.

"He was a good supporter of Vettel, and when I hired Sebastian - because I was the guy who just a few weeks before leaving the team signed the deal with Vettel - Michael was for sure pleased.

"He told me a few years before that Vettel, in his opinion, was a good driver for Ferrari."

Vettel's victory in the recent Canadian Grand Prix was his 50th in F1 and his 11th with Ferrari.

He now leads Mercedes' Lewis Hamilton by one point in the 2018 drivers' championship.

"Michael has won many championships with us, Seb unfortunately not," said di Montezemolo.

"I hope that he will soon start a new era, winning in a [run of] championships like Michael.

"To achieve the same results as Michael is not so easy [even] if he's young and strong, a good driver, and this year finally with a very competitive car.

"I hope Seb will not have too much pressure on him. He's strong, the car is good. Mercedes, until now, doesn't seem to be so competitive.

"There are a lot of chances. Maybe this could be a good year."