Just like both of Thursday's practice sessions, the ultra-soft-dominated practice three provided another fastest-ever lap of the Monte Carlo track, Vettel's 1m12.395s a three-tenth improvement on his own previous record.

After an initial flood of installation laps in the opening minutes, Mercedes driver Valtteri Bottas was first of the frontrunners to kick off a proper run, the Finn quickly establishing himself at the top of the timesheets.

But compatriot Raikkonen's first effort dethroned Bottas immediately, the Ferrari man posting a 1m13.568s as Bottas himself then came up 0.053s short.

Despite causing a brief yellow flag as he stopped just short of the barriers at Antony Noghes, Raikkonen lowered the session benchmark further with his next proper effort - a 1m13.379s.

Lewis Hamilton briefly returned Mercedes to the top spot, but was relegated behind the two Ferraris in no time, Vettel now edging ahead of Raikkonen via a 1m12.890s lap.

The other Mercedes of Bottas was shuffled down even further at the conclusion of his first run, with the Red Bull of Max Verstappen and the Toro Rosso of Daniil Kvyat splitting the two Silver Arrows.

As the session passed its halfway point, Verstappen broke up Ferrari's one-two at the top of the timing screens, lapping 0.050s off Vettel 12 laps into his ultra-soft stint.

But Ferrari was soon back in formation at the front, Vettel finally beating Thursday's best lap with a 1m12.558s effort a few seconds after Raikkonen had overtaken him and Verstappen.

Vettel then went even quicker, stringing together three purple sectors for a 1m12.395s - and going just 0.003s slower with his next flying lap.

By that point, Mercedes now had its first sub-1m13s lap of Monaco courtesy of Bottas, who emerged as best of the rest behind the Ferraris heading into the final few minutes. 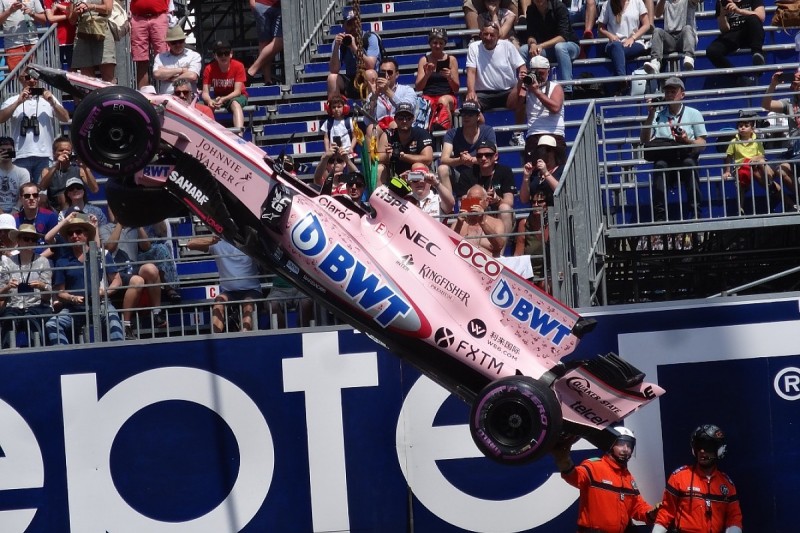 But the running in what had been a largely incident-free session was then disrupted when Esteban Ocon hit the guardrail on the entry to the Swimming Pool section, damaging his Force India's right-front suspension and going nose-first into the barriers.

This triggered a virtual safety car as the Force India was removed from the track, leaving less than four minutes for those seeking to do a last-gasp qualifying run.

Improvements were few and far between in the hectic final minutes, leaving Ferrari with a comfortable one-two out front.

Bottas took third ahead of Verstappen and Hamilton, with Daniel Ricciardo in sixth after a suspected brake failure at the chequered flag left him stranded at the escape road at Sainte Devote.

Haas driver Kevin Magnussen, who had drawn the ire of Ocon for holding him up in the final sector, was ninth, while McLaren's Stoffel Vandoorne made up the top 10.