Hamilton secured the 59th pole of his F1 career on Saturday, but has only won four of the nine grands prix he has started from there so far this year.

That has primarily been down to poor starts and issues with Mercedes' difficult clutch, although Hamilton looked more at ease last Sunday at Austin, making a superb getaway from pole and winning the race.

"Already from last weekend I felt more confident in the whole process," Hamilton said on Saturday.

"I wish I had that in the beginning of the year. Obviously we'd be in a different position now. At least we've got it right now.

"I feel confident for tomorrow. It's obviously a long run down to Turn 1, so it will be even more important to get a better start."

Asked if any specific changes had provided that improved confidence, Hamilton said: "No, just a process of continuing to work.

"It's still not bulletproof, still things we're working on, and we'll continue to do so until the end of the year."

Mexico City's 0.59-mile run to Turn 1 is one of F1's longest, offering a chance for those starting behind to pass Hamilton, with or without a bad start.

He will be joined on the front row by team-mate Nico Rosberg, both starting the race on soft tyres, while Red Bull's Max Verstappen and Daniel Ricciardo on the second row will be on super-softs.

"The tow is very, very minimal here [due to the thinner air at high altitude]," Hamilton said.

"Last year I was right behind Nico and it didn't make hardly any difference, but the tow effect is still there and that's why I want a good start.

"As for the Red Bulls, they should be pretty strong in the first lap.

"I'm guessing they'll have an advantage of three metres by Turn 1 with the softer tyre - that's generally the statistic [the engineers] work on.

"We'll try and keep them behind somehow." 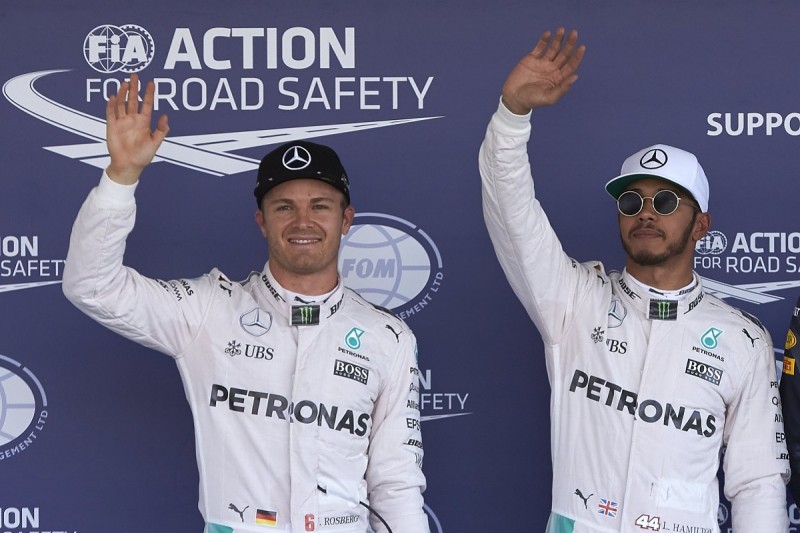 Rosberg, who leads the championship by 26 points over Hamilton, is "not concerned" by the Red Bull duo and gunning solely for his main title rival.

"I had a great start in Austin on the softs, just as good as the guys on the super-softs," said Rosberg.

"It's a long run down to Turn 1 so that should be an advantage for the guy starting second.