Mercedes asked Valtteri Bottas to hand Sochi victory to Hamilton in a change of plan induced by the race circumstances. That gave Hamilton a 50-point championship lead over Sebastian Vettel.

Hamilton and Bottas share the front row again at Suzuka this weekend, and Wolff said Mercedes would be open-minded about whether to deploy team orders depending on what scenarios unfolded.

Asked by Autosport if the team would approach its pre-race briefings with the drivers differently in Japan, Wolff replied: "Yes, differently, because we learn, and we're trying to learn.

"Maybe our discussion that we had on Sunday morning in Sochi was a good discussion, but didn't consider the situation of us being under pressure in the way we were, in a sandwich-like situation with Sebastian all over Lewis, and Verstappen in the front.

"And it reminds you that the best plan doesn't survive contact with the enemy, and that happened to us in Sochi.

"So the discussion tomorrow is going to be a different one, leaving enough space to take decisions that might be a necessary evil."

Wolff admitted there was not enough clarity in Russia, which is why Bottas was so frustrated when asked to move over.

"I guess that I made a mistake of not being 100% clear over what I wanted to achieve," he said.

"I'm torn between the racer and the cold-blooded rationalist, which you need to be in that situation.

"Thinking about the race panning out, and imagining Valtteri running first, Lewis second and Sebastian third, I thought we're scoring three points more than Sebastian and increasing that advantage.

"But when the race actually happened on Sunday we were at risk of losing P2 to Sebastian, and therefore losing ground in the championship, and this is why I changed my mind.

"Since then we have spent a lot of time with the clever guys reassessing the situation.

"I would want to keep the options open for tomorrow and see how the race goes. [At Sochi] the plan didn't survive first contact with the enemy." 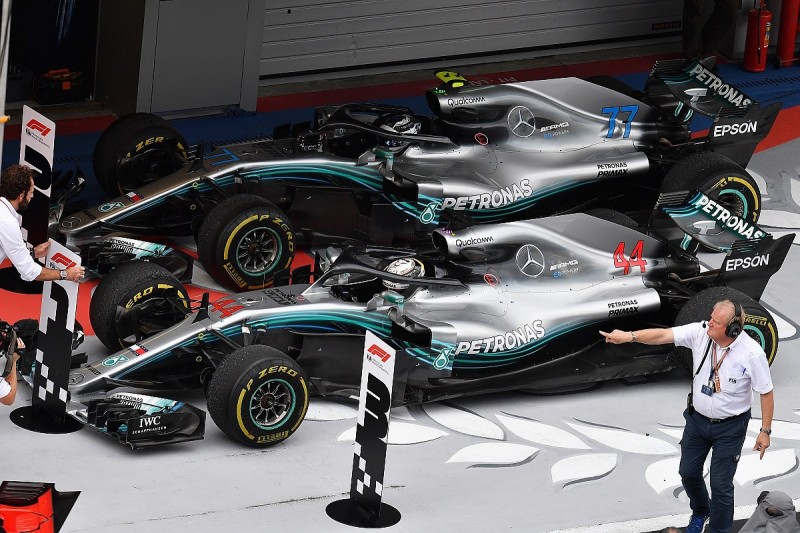 Wolff stressed that despite Hamilton going into the race with a 50-point lead, and there being only four more races after Japan, it is still too early to allow Bottas to take points off his team mate.

"Would anybody ever have thought that you could lost 45 points in two races? Impossible.