The stated object of the two-day test is to trial new COVID-19 protocols for the start of the World Championship in Austria next month, but the track running also gives both the drivers and the team a chance to get up to speed after the enforced break.

Lewis Hamilton is due to take the wheel on Wednesday.

The test is permitted under the FIA rules as the team is using a 2018 car, which has to be run to contemporary spec, with no current parts being trialled.

The team also has to use testing tyres provided by Pirelli, rather than 2020 race rubber.

Mercedes team boss Toto Wolff conceded that restarting the season behind closed doors, and with a busy calendar, will be challenging for the teams.

"At least we know that we are going back to racing for the next few months," Wolff told Sky F1.

"It's a solid European calendar, and everybody back in in Brackley and Brixworth is happy that we can finally get back on track. We love the competition, and we missed that. 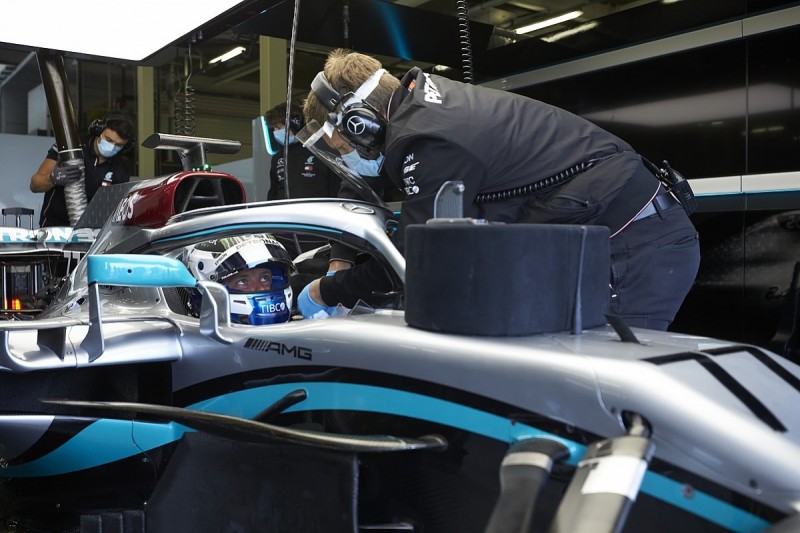 "It is a challenge. We are all aware why that is, but I think we owe it to our fans to give them racing and come up with a good show. Of course it will be heavy for all of us, doing triple-headers, not being able to go home, but it's these special circumstances."

Wolff said it was impossible to predict how the competitive balance has changed between the teams since winter testing.

"The time is very limited to work on the cars, we've barely had five weeks when we can do something.

"Of course, we will try to improve. Maybe bring an upgrade that would have been planned anyway for that time of the year.

"It's going to be more of a live testing experience, rather than running it in previous races, in free practice sessions.

"So very exciting, very new. A curveball that is thrown at all of us. And may the best man win."

Wolff says he personally is more motivated than he was at the originally scheduled start of the season.

"When we went racing in Australia I didn't look forward to it, because I had six so intense seasons fighting for world championships, so that the mental exhaustion was still there.

"When it got cancelled obviously we didn't know what happened, and I'm very happy now, because we've been starved of F1 and I'm very much looking forward to going back to racing.

"In a way sadly there will be not a lot of fans, and not a lot of media, but it's been reduced to what I love the most, and that is the competition."