He insists that they will still be allowed to race each other until late in the season despite their Hockenheim lead battle being called off.

After the restart following the safety car period, Bottas initially pushed leader Hamilton until Mercedes intervened on the radio.

Asked if the decision was a sign that the team now has a clear number one and two, Wolff was adamant that was not the case.

"No, absolutely not," he said. "If it had been the other way around, with Valtteri in the lead and Lewis second, we would have made the same call. Identical call.

"It was about bringing it home, irrespective of who was in the front.

"When they started to be all over each other at the restart, it was still raining at places, or it was still humid. And we had so much bad luck in the last couple of races that the scenario of losing a car, or two, it was just something that I didn't want to even envisage."

Wolff denied there was any need to discuss the situation with Bottas.

"I think it's pretty clear between us," he said.

"But what I said to Valtteri is something that I would also say in the team: I would have done the same thing the other way around.

"This is the transparency we have in the team, that we wouldn't make a difference.

"It was important to score the double podium, the one and two, in order to recover some of the points which we lost through bad luck." 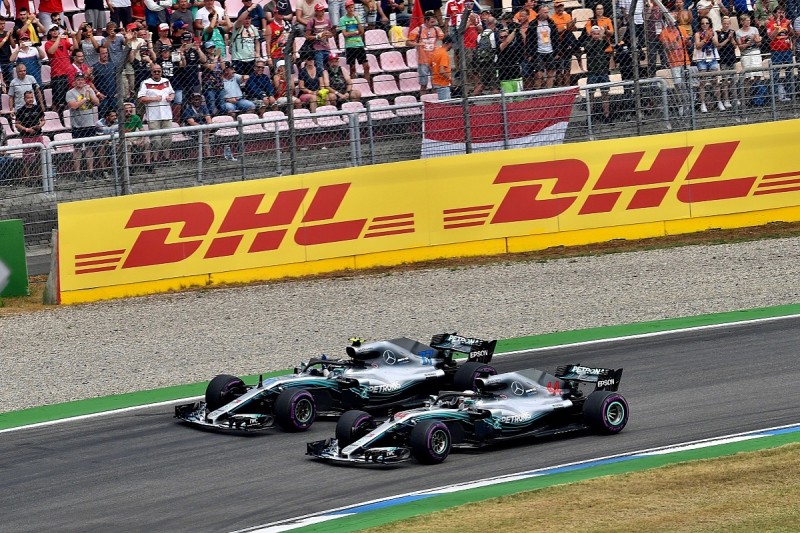 The Hockenheim result leaves Hamilton 66 points ahead of fourth-placed Bottas in the standings, but Wolff said there will not be a team orders policy until the critical stages of the title battle.

"Racing is most important. We always said if the championship goes into its last third, or last quarter, and there is a big difference between the drivers, then we might make these unpopular calls," he said.

"But it's much too early in the season to do this. [In Germany] we made it in order to bring a one and two home. We would have done it the other way around."

Earlier in the race Ferrari asked Kimi Raikkonen to let Sebastian Vettel into the race lead after Raikkonen's early pitstop had vaulted him ahead.

"It's also a very difficult call, because on one side you want to optimise the result and that is what you need to do," Wolff said of Ferrari's decision.

"But on the other side you need to give to both drivers a chance to win the race.

"Kimi was unlucky in the few races in the beginning of the season, where the strategy went against him and I think that Ferrari struggled to come up with the right call there. It's understandable."

Hamilton was '100% open' with Formula 1 stewards in pitlane inquiry