Vettel clocked the fastest-ever lap of the Monte Carlo street circuit - a 1m12.720s - to set the pace on Thursday afternoon, with team-mate Kimi Raikkonen third.

Lewis Hamilton, who was fastest in the morning, and Valtteri Bottas ended the session eighth and 10th respectively.

The pair were 1.1 seconds adrift and behind both Red Bulls and Toro Rossos and split by Kevin Magnussen's Haas.

"I don't know what happened to them today, it was a bit weird," Vettel said.

"I'm pretty sure there is a reason and they will be back to full force on Saturday so it will be close, also with Red Bull."

Vettel, who was second quickest in opening practice, was encouraged by Ferrari's pace but feels there is "plenty more" to come for qualifying on Saturday.

"I was pretty happy in the afternoon," the championship leader said.

"In the morning, I was maybe a bit wild touching the walls a couple of times but the afternoon seemed a bit better.

"Around here, it's important to have a good feel for the car, get the lap together.

"You can't always go with the one time you set at the end of the day but we managed to put it together and we're quite happy." 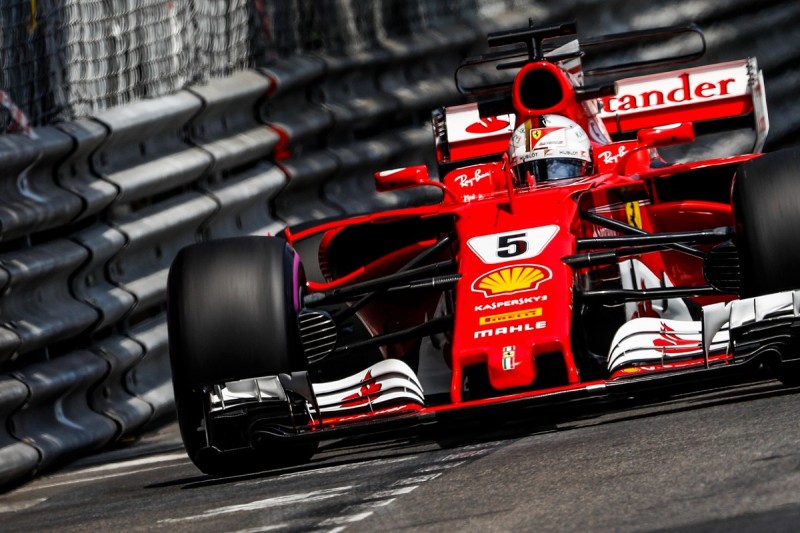 Raikkonen was encouraged by his pace on Thursday, particularly on longer runs.

"It was getting better and better," said the Finn.

"In the long runs, the car was feeling good, so I have a good feeling.

"In the shorter runs, we have to improve a little bit.

"We did some changes and it always got better - so that's the main thing.

"We had two smooth sessions, doing our normal work."

Vettel echoed Raikkonen's confidence on Ferrari's race pace but believed there was a lot to do between now and final practice and qualifying on Saturday.

"It's always tricky to judge because you don't get so many clear laps with a lot of traffic, but it seemed OK," he said.

"I think we can still do, and have to do, something to the car to be more competitive overall and in the race.

"But I think Kimi and I were quite happy with the long run."