Mercedes motorsport boss Toto Wolff believes it is unacceptable Formula 1 is arguing over where 2017 pre-season testing should be held, so late in the current campaign

The battle lines have been drawn between teams pushing for Bahrain, such as Mercedes and Ferrari, and the likes of Red Bull and Williams, which would prefer to stick to the previously-announced Barcelona for cost and logistical reasons.

Bahrain was raised as a potential venue to provide warm-weather testing for Pirelli with F1's new-generation cars.

The furore has come despite Pirelli showcasing the incoming wider tyres at Monaco in late-May.

"It shouldn't be like this," Wolff said. "We can't find out in October.

"We have all been given targets of where we expect the tyres to come in, and to be fair, Pirelli have a variety of opinions on the downforce levels for next year.

"There were [teams] that wanted the regulations to change, that [said] we were scaremongers because we expected the downforce to be coming in on a high level.

"Then suddenly we find out and, 'oops!' It's really much more than we expected.

"Then there are the teams that don't really release information, and Pirelli is in the dark about what to expect for next year. It's not a good situation." 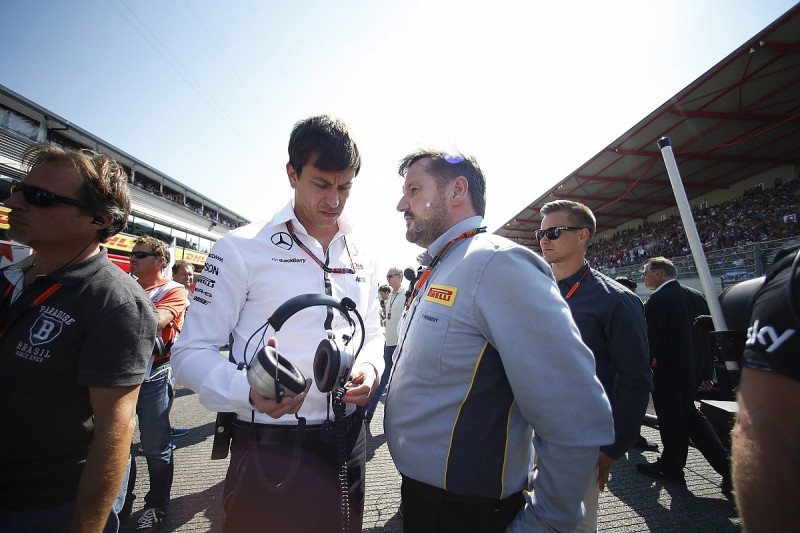 To that end, Haas team principal Gunther Steiner believes teams must go to Bahrain for the good of the show, if that is Pirelli's request.

Steiner fears F1 could look "foolish" by arriving in Australia for the 2017 season opener with tyres that could have a detrimental impact on a grand prix.

"Do we need to go or do we not need to go? Pirelli can decide that and then it lets the FIA know what it thinks it needs to do," said Steiner.

"The worst thing for F1 will be if we go to Australia and we have a problem with tyres. Do we want that? No.

"But how much will it cost if we don't race or have a problem in Australia? That's not cheaper.

"The last thing we want to do is look foolish."

Pirelli racing manager Mario Isola recognises "there is no perfect solution", and that whatever decision is made will not please everyone.

"I don't know what will happen, I have no idea to be honest. It's quite balanced," Isola told Autosport.

"Hopefully there will be a decision soon because although there is no deadline, I know everyone needs information to start making a plan."