Following the summer break and the introduction of its successful Singapore upgrade package, Ferrari has largely outclassed Mercedes, which has not brought any meaningful updates in recent rounds.

Aiming to draw level once more, Mercedes has brought a small update to Suzuka to put the pressure back on Ferrari.

Team principal Toto Wolff promised that Mercedes would test "little things that we are just interested to explore" in Suzuka, but stressed that the team has no plans for any larger upgrades this year.

The turning vanes have now transitioned into three distinct 'phases'.

The front vertical piece (green arrow) remains, but the central horizontal elements marked with the red arrow have increased from four to five, and no longer extend below the sidepod-mounted element as the previous specification did.

While the sidepod-mounted piece (purple arrow) was formerly made of one piece, it has now been broken into two parts - presumably with the intention to generate tip vortices. 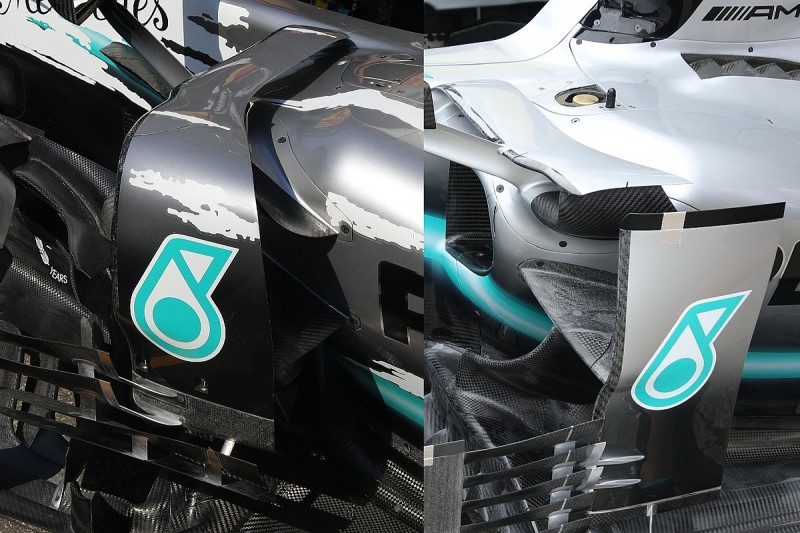 The element mounted to the top of the sidepod will induce a small amount of lift, but in doing so can direct a passage of air down the slope of the sidepods.

Breaking the two parts up allows the team to extend the vertical component further up.

Over the season, Mercedes has been conscientiously modifying its turning vane and bargeboard assembly to extract performance from the car.

At the beginning of the year, the launch car featured three vertical vanes, but the switch to a greater focus on the horizontal elements suggests a vastly modified approach to conditioning the tyre wake.

Using a mixture of horizontal and vertical parts gives Mercedes's aerodynamicists more options in breaking down the turbulence and turning it into something useable.