Two-time F1 world champion Alonso departed grand prix racing at the conclusion of the 2018 season, albeit leaving the door open to a future comeback.

His decision to compete elsewhere in 2019, coupled with team-mate Stoffel Vandoorne being let go by McLaren, means that the team heads into next year with an all-new driver line-up.

CEO Zak Brown made clear Alonso was welcome to try the new McLaren, and rookie Norris hinted he would be willing to give up some running to have Alonso sample the car.

"I think [his input] will be very valuable," Norris said. "He's got the best idea how the car's changed over the years, the best experience of what's good and what's bad, a lot more than I do.

"I don't know what's going to happen, if he's still going to be part of much. He's still part of McLaren. It's up to him. 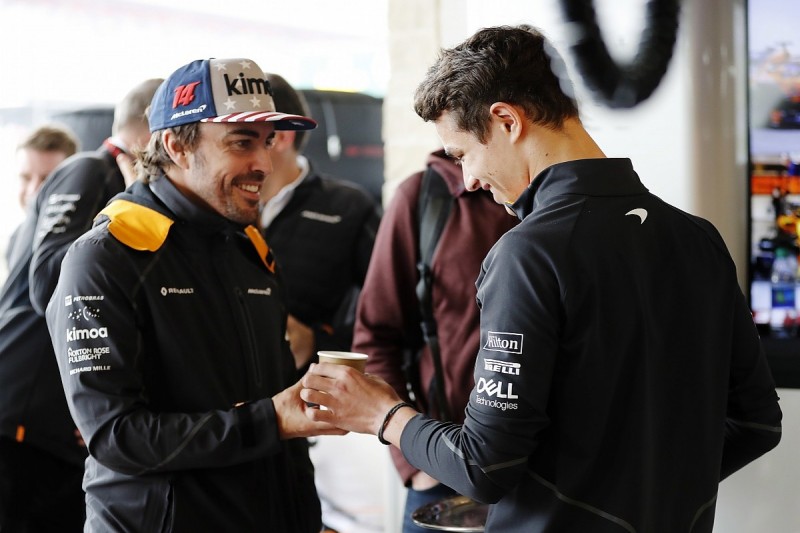 "It would be cool. Of course I would like to have as many days [in the car] as possible but if everyone comes to a decision and thinks it's for the good of the whole team and his feedback will be just as important as mine or Carlos's, then I think it's a good thing."

"It's something that for sure is in McLaren's interests, or also Fernando's interests to keep himself active," said Sainz.

"It's a decision more up to the management than to ourselves, but I wouldn't see it with bad eyes.

"I would see it as a good thing to have a driver like Fernando comparing cars."

While McLaren's sixth in the constructors' standings in 2018 was a clear improvement on the nadir of ninth the previous year, the MCL33 faded down the order and was often slowest of all by the end of the season.

Brown freely admitted it was "an extremely poor racecar".

McLaren underwent major operational changes in 2018, but Norris conceded "no one knows" whether improvements will come as soon as next year.

"[They] have decent ideas of things they are working on, bits they are trying to improve, all these little things that they've had lots of data to say is better.

"Sometimes it looks good in the windtunnel, on the aero mapping or whatever, and you get to the track and it does something slightly different to what you expect.

"Of course they are confident they are making the right changes. There's been quite a big change in the team and how they are approaching the work for next year, the development.

"They are focusing more on something that's 100% better, rather than saying 'it looks like it's going to be better' and putting it on the car.

"I think they have a much better understanding - but only time will tell."

The contradictory 2019 rule change that 'fooled the FIA'