McLaren Formula 1 team boss Andreas Seidl is "cautiously optimistic" about his team's Monaco Grand Prix prospects but warned the team's improved low-speed performance is no guarantee it will be competitive.

McLaren was one of the teams that introduced a whole raft of upgrades at last week's Spanish Grand Prix in Barcelona, which allowed Lando Norris to score points in eighth after an inconsistent start to 2022 by the Woking-based team.

Compared to its high-speed prowess in previous years McLaren believes it has now produced a more balanced all-round package, with low-speed corners no longer the weakness they once were.

With low-speed grip obviously being key in Monaco's tight streets, Mercedes team principal Toto Wolff said his "expectations for Monaco are lower than on any other circuit" because Mercedes was off the pace this weekend in the Circuit de Barcelona-Catalunya's last sector.

But Seidl said he doesn't believe that Barcelona's twisty last sector is necessarily a good indicator for Monaco performance given how much of an outlier the street circuit is.

Despite McLaren's slow-speed weakness last year, for example, Norris still qualified fifth in the principality and grabbed a podium in the race with third place.

"Monaco is such a special track that it's always difficult to predict how you do there," Seidl said when asked by Autosport if the team's improved slow-speed performance made him optimistic for the upcoming weekend.

"Even last year, for example, where we had a car which struggled quite a lot with low speed compared to our competition, we could actually fight for I think top four in qualifying and we even scored the podium in the race.

"It's such a specific track that together with having these completely new cars it's probably even more difficult to predict what it's going to look like." 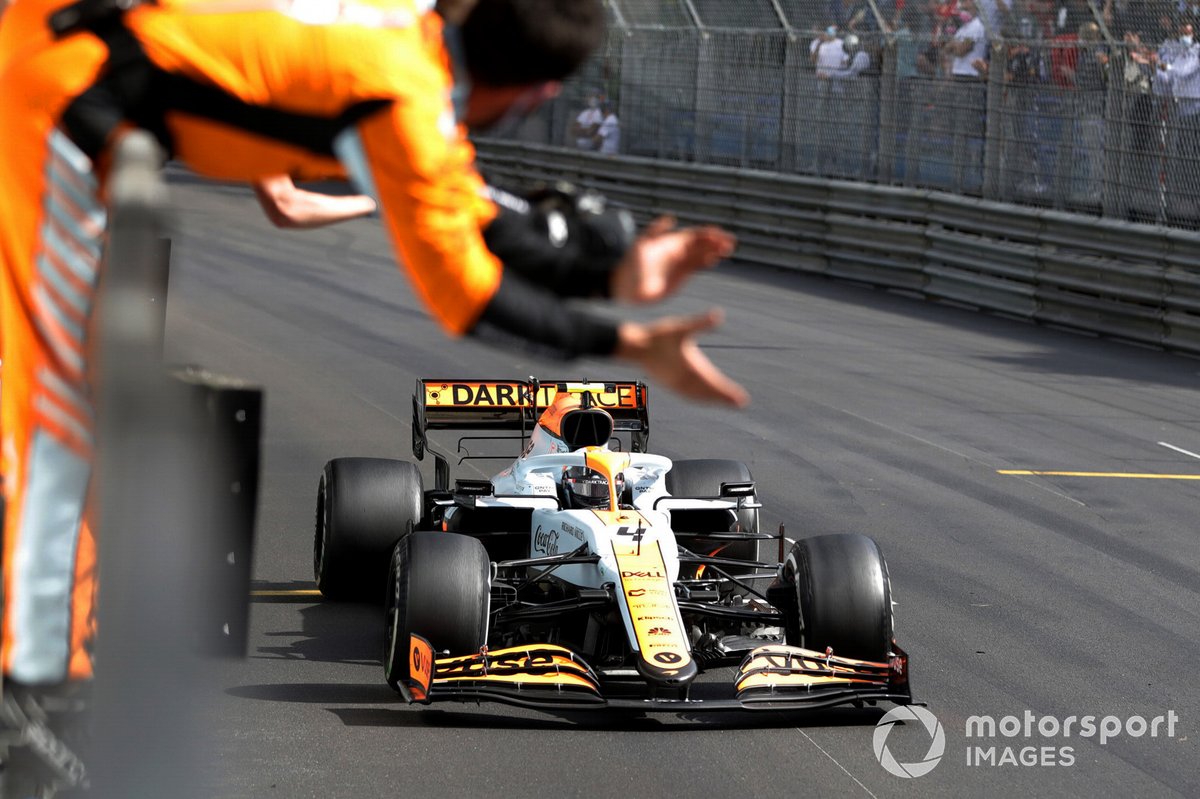 Lando Norris, McLaren MCL35M, 3rd position, crosses the line to the cheers of his team on the pit wall

With Monaco being a true drivers' track, Seidl hopes Norris and team-mate Daniel Ricciardo can repeat some of their previous Monaco performances. In addition to Norris' 2021 podium, Ricciardo dominated the 2018 edition for Red Bull. That triumph came two years after he saw a certain win slip through his fingers in 2016.

"A lot is obviously also coming from the drivers at this track where Daniel in the past pulled off some great results, and Lando was always strong there as well," Seidl said.

"I guess we can go there cautiously optimistic but at the same time we all start from zero again next Friday morning and just wait and see how it goes."