The announcement, made at a special media briefing at McLaren's Woking F1 headquarters on Thursday, ends months of speculation over who will partner Alonso when the Spaniard rejoins the team next year.

Debate raged within McLaren over whether 2009 world champion Button's greater experience should be preferred to rookie Magnussen's longer-term potential.

A decision on the final driver line-up had been anticipated ahead of November's Abu Dhabi Grand Prix, but an announcement was twice delayed as agreement failed to materialise at boardroom level.

Button, 34, who recently described McLaren's indecision over its 2015 driver line-up as "strange", was ultimately given chance to prolong his career.

The decision means Magnussen, 22, will be left without a race seat in F1 next year, but the Woking team said the Dane would be retained as reserve driver.

"Being a part of new-look McLaren-Honda is a wonderful opportunity for all of us, and I am very pleased to have been invited to do my bit. In fact, I am absolutely raring to go," said Button.

"I am also very glad that Kevin will remain part of the team. He is a very quick driver and a really nice guy.

"Looking forward, I know the Honda guys well, having driven Formula 1 cars powered by their engines from 2003 to 2008. 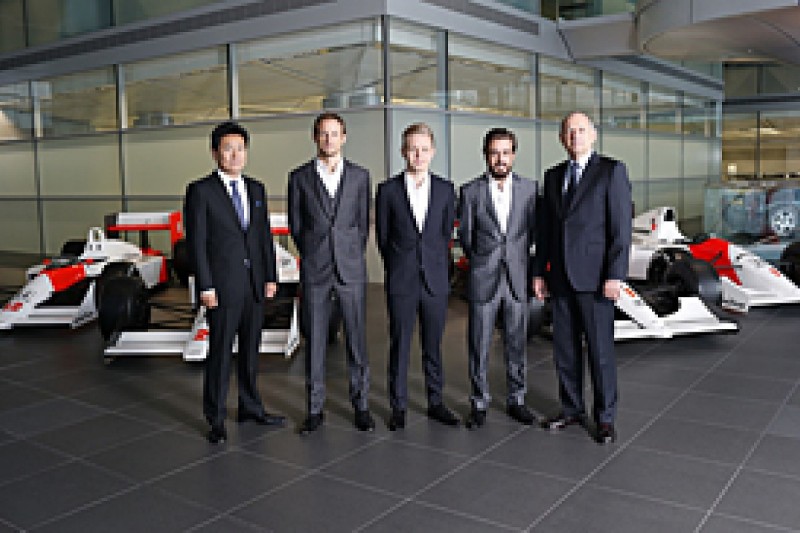 "I have a huge amount of respect and admiration for them, and promise to give 100 per cent to make their partnership with McLaren a success.

"Last but far from least, I am very much looking forward to having a driver as fast and as experienced as Fernando as my team-mate. I am sure we will work extremely well together."

McLaren chairman Ron Dennis said the chance to pair proven world champions Alonso and Button was too good an opportunity to pass up.

"Fernando and Jenson have started a combined total of precisely 500 grands prix between them - a mighty aggregate - and have won 47 of them," he said.

"I can safely say, therefore, that we now have by an order of magnitude the best driver line-up of any current Formula 1 team.

"I want to thank and pay tribute to Kevin, who has done a great job this season and will continue to be an integral part of our team.

"He will be our test, reserve and third driver, and remains an excellent prospect for the future."