McLaren has defended its "ambitious" 2018 Formula 1 car design, but admitted its testing reliability problems are because it "didn't do a good enough job" with preparation

The team's switch from Honda to Renault power this year has not got off to the start it had hoped for, with wheelnut, cooling, battery and turbo problems having cost McLaren valuable running.

Fernando Alonso's final day of testing on Friday was hit early on when he stopped with a turbo problem and McLaren elected to change engines in a bid to get him back on track as quickly as possible.

But despite failing to hit its mileage targets for the two Barcelona tests, and admitting that some issues have come from it pushing its packaging to the limits, racing director Eric Boullier does not think McLaren has made a major error.

"We want to be competitive and we are ambitious," he said. "We have an ambitious design around the car and you can see that the car is a little bit different from the other Renault-engined cars.

"So far we had minor issues but I think that was because we didn't do a good enough job to prepare the car.

"We were a little bit stretched in terms of lead time and delay - but these are our issues. Very quickly we are going to get back to normal."

When asked if McLaren should have been more conservative, he replied: "Again, if you want to be competitive you have to be a bit aggressive and ambitious.

"We just have to make sure we, in this strategy, leave us enough time to do everything. That's the only point, I would say." 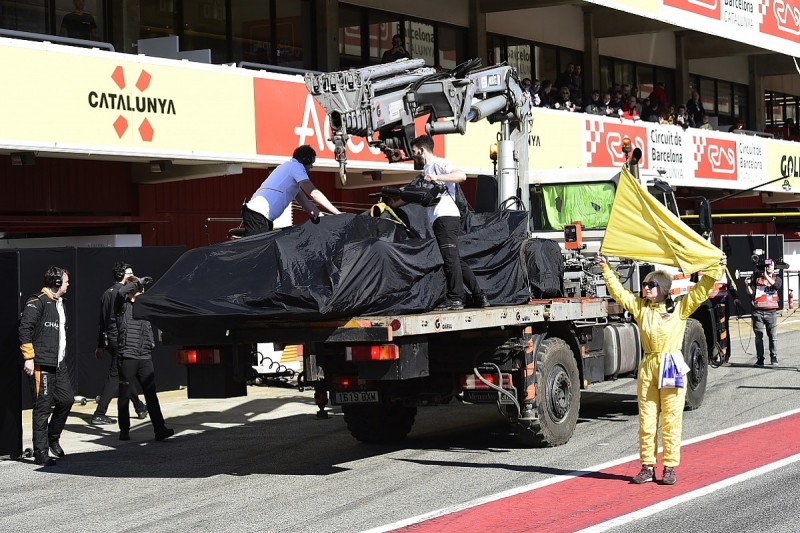 Boullier did confess that the stoppages McLaren has suffered in testing mean he cannot guarantee the team will be on top of its reliability issues by the Australian Grand Prix.

"Not 100% because we have not run as much as we wanted, so there will be a higher risk of failure somewhere," he said.

"Nevertheless we had only minor issues which were all different. A good rebuild of the car for Australia will help us to fix a few issues."

McLaren's reliability woes have prompted some to suggest it is not as ready for a step up the grid as it had hoped for. But Boullier thinks it is far too early to write its hopes off.

"Let's wait and see," he said. "If you judge based on a few issues on three days, it is better to wait a few races.

"There was a decision made [to join Honda] before I arrived in McLaren.

"The last three years was a difficult context and now we are trying to get McLaren back where it should be.

"Like anything you don't do it in one day and there are maybe a few glitches.

"We have not lost our capability of designing fast cars and I hope you will see it on track soon."