The 16-year-old Dutchman, who lies second in the F3 European Championship in his debut season of car racing, is understood to have offers from both squads.

Verstappen Sr told AUTOSPORT: "A lot of people are putting pressure on us, but not on Max - we're just letting him concentrate on Formula 3.

"What the right decision is I really don't know at the moment, but I'm happy to be in this situation - Max has impressed a lot of people."

But Fortec Motorsport, which has strong Mercedes links, is known to be keen to run him in Formula Renault 3.5, and team boss Richard Dutton - whose team has already tested Verstappen in Formula Renault 2.0 - was spotted in discussions with Vermeulen at the Red Bull Ring.

A Red Bull link-up could push Verstappen towards Carlin - which has run many of the organisation's proteges - for GP2, Formula Renault 3.5, GP3 or another season of F3.

Verstappen Sr said: "I know that Trevor [Carlin] has been talking to Helmut since the beginning of the year about Max."

NO FEARS OVER BIG JUMP

"The train only comes once," he said. "I think it's good for Max to throw him into the deep and let him climb out - he learns so fast. 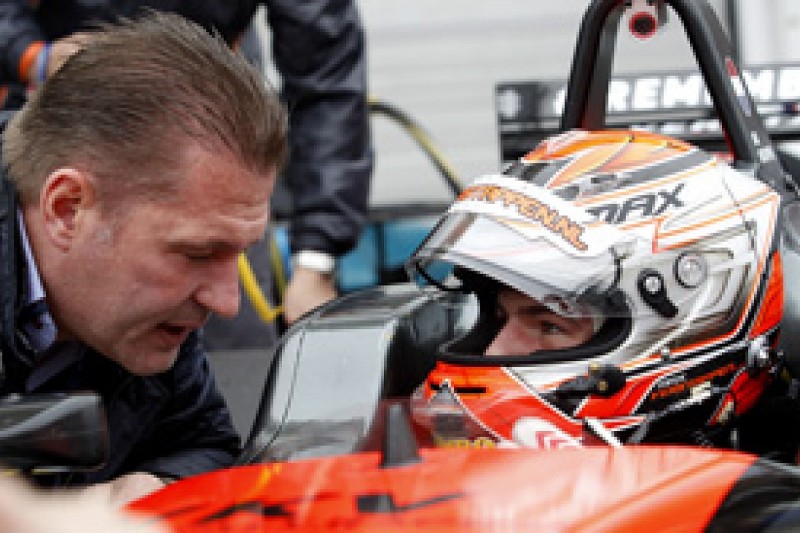 "The important thing is that he develops himself very well, and he has adapted impressively to the issues he's had this year.

"I don't want to play games, especially as this world is so bloody small I know they [Red Bull and Mercedes] are even speaking with each other!

"I have a good feeling with both parties but the important thing is what's best for Max.

"I'm having a lot of sleepless nights and I'm very scared to do the wrong thing."

Meanwhile, Verstappen's current team boss Frits van Amersfoort told AUTOSPORT that his team has had an agreement with VW since the beginning of the year to run him in November's Macau Grand Prix, in the wake of overtures from other teams.

What Newey's move says about F1