The Formula 1 organisation says that the failure of a local fibre optic line caused the outage that impacted TV coverage and team radio transmissions during first practice for the Emilia Romagna Grand Prix.

The F1 data system went down at the start of track action and a quick switch was made to a "recovery mode" that allowed basic operations to continue via a satellite link.

However, many features such as data transmission, onboard cameras and team radios were out of commission for at least part of the session.

The fibre failure was addressed during the lunch break and FP2 took place without any further problems after the normal system was reset.

As a result of COVID-19 restrictions, F1 has switched more of its technical operations from the track back to its UK base in Biggin Hill in order to reduce the need for personnel to travel to races, but the organisation has stressed that today's failure was local. 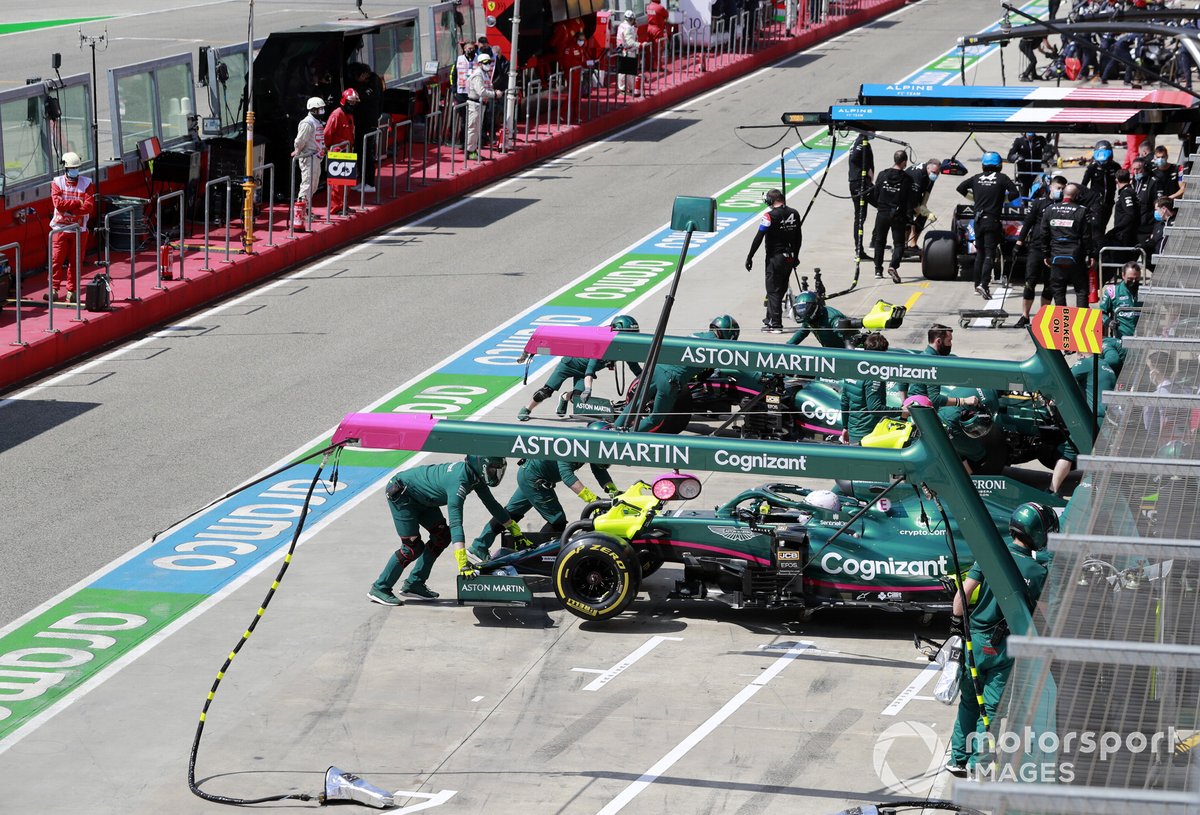 Sebastian Vettel, Aston Martin AMR21, is returned to the garage

The outage created major issues for teams, as radio communications to drivers were disrupted, making it impossible to give the usual guidance about traffic issues when faster cars were approaching from behind.

The lack of contact with the pit wall contributed to a clash between a slow-moving Esteban Ocon and Sergio Perez, which brought out a red flag. After a hearing the stewards took no action on the matter.

"Certainly, it was a big problem," said Ferrari team principal Mattia Binotto. "I don't know if in all the teams we had exactly the same problems. But for us, it was very difficult, especially on Charles [Leclerc], no way of communicating to him.

"It's difficult because you cannot give him advice on the cars following, so then there can be impeding situations which are not voluntary at all, but very difficult for the drivers as well to know who is coming behind.

"On top of that we are running our race power unit, because those power units are the ones we fitted in Bahrain and are used for the entire weekend. So obviously, if you've got any problems, you don't know how to react and to communicate. So these type of problems are serious."

"The experience was a bit strange because we had no lap times," said Alfa Romeo boss Fred Vasseur. "We had the data for safety at least. It was just for the first stint until the mid-session, so it's OK for me, it's not a drama.

"We discussed it after the session, because the drivers were complaining about the radio, but 20 years ago the guys were able to drive without the radio!"

"Until you lose that kind of data I don't think you realise how much you rely on it," said Aston Martin's Otmar Szafnauer. "It was like we were blind on the pit wall. Even driver communication wasn't working. It made things much more difficult."