Lewis Hamilton has committed his Formula 1 future to Mercedes after a new two-year deal was announced ahead of the Austrian Grand Prix.

With the F1 world champion having only agreed late last winter a single season contract extension for 2021, there had been intense speculation over recent months about what his long-term plans were.

However, with the Briton and his team bosses eager to not let discussions drag on too long amid the intensity of the current title battle, a contract has been agreed that will commit Hamilton to the team until the end of 2023.

The new deal means that by its completion Hamilton will have raced for Mercedes for 11 seasons, having originally joined the Brackley-based squad in 2013. He has so far won six of his seven world titles for the German manufacturer's works team.

Speaking about his new contract, Hamilton said he felt that they both had much more to achieve in F1 - both on and off the track.

“It is hard to believe it’s been nearly nine years working with this incredible team and I’m excited we’re going to continue our partnership for two more years," he said. "We’ve accomplished so much together but we still have a lot to achieve, both on and off the track.

"I’m incredibly proud and grateful of how Mercedes has supported me in my drive to improve diversity and equality in our sport. They have held themselves accountable and made important strides in creating a more diverse team and inclusive environment.

"Thank you to all the dedicated and talented individuals at Mercedes whose hard work makes it all possible and the Board for their continued trust in me. We’re entering a new era of car which will be challenging and exciting and I can’t wait to see what else we can achieve together."

Hamilton’s extension comes with Mercedes now needing to make a decision on who his team-mate should be for next year.

Valtteri Bottas’ contract runs out at the end of this season, and the Finn knows that he needs to impress his bosses if he is to hold on to his seat. 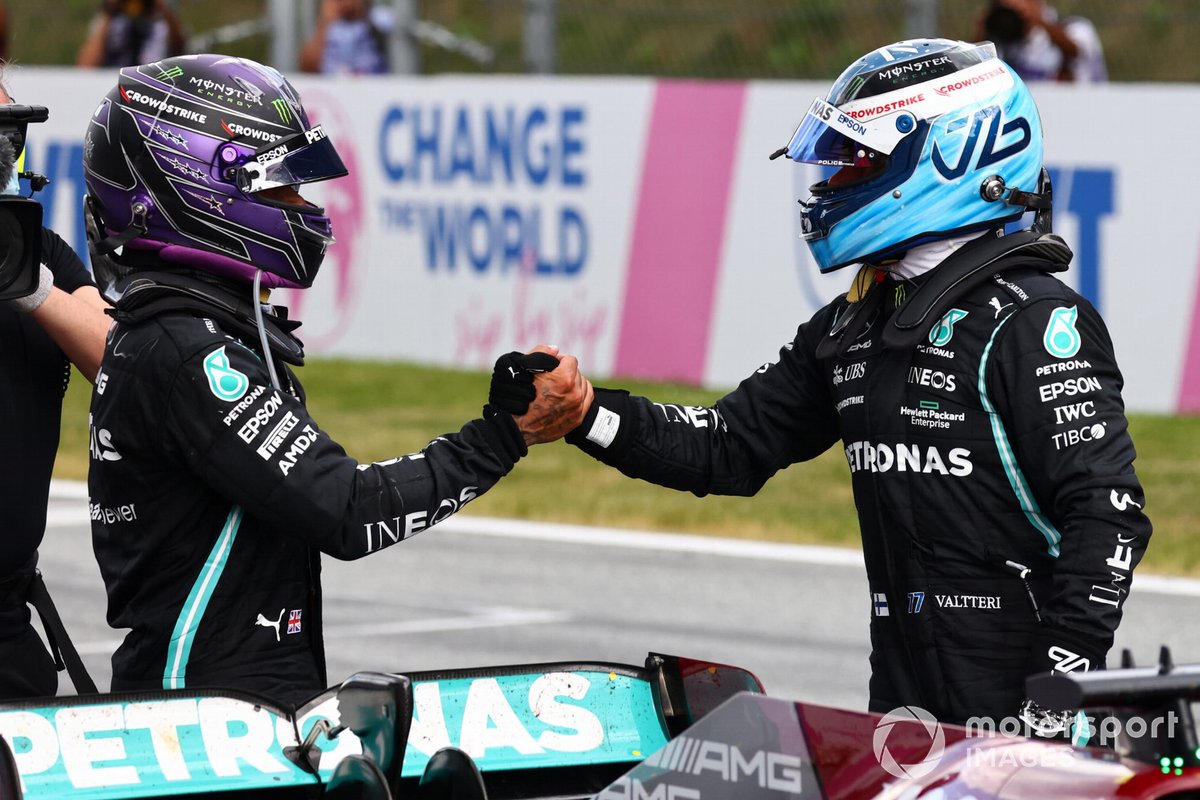 Mercedes’ other option is George Russell, whose three-year contract at Williams also ends this campaign.

Russell impressed Mercedes greatly during a one-off appearance at last year’s Sakhir Grand Prix, when he came close to winning the race as he stood in for the unwell Hamilton.

Although Mercedes boss Toto Wolff joked recently that the team could wait until the winter to finalise the second driver choice, it is likely that a call will be made around the time of the summer break.

Hamilton said recently that he would prefer for Bottas to stay on board, with the pair having built up a good rapport since they first worked together in 2017.

"Valtteri is my team-mate now and both of us have had ups and downs in our careers,” he said. “But he is a fantastic team-mate and I don't necessarily see that it needs to change.

"We have worked well for many years. Valtteri has been my best team-mate overall and when I say team-mate, it's not just driver performance. It's about team morale and how you work in the team-mate environment."