The Mercedes swept opening-day running at Barcelona, with Valtteri Bottas quickest in practice one and Hamilton setting the afternoon pace, while Ferrari - on a run of three straight poles with Sebastian Vettel - was slowest of the three leading teams.

Vettel, the faster of the two Scuderia cars in both sessions, was 0.95s off the pace in the first session before improving to 0.326s adrift in the afternoon.

But Hamilton was not convinced Ferrari's form has dropped off.

"I think it's still very close," he said.

"Not really quite sure where Ferrari's pace was today, but they're probably sandbagging or something. They'll bring it out tomorrow.

"The Red Bull's obviously very close to my pace, so I think, again, it's going to be relatively close between the top three teams.

"I can't really tell you which one's quickest at the moment - because again, fuelling [levels], and maybe one didn't get their lap or something like that. Tomorrow we'll get a much better understanding."

Team-mate Bottas offered a similar assessment to Hamilton's, saying: "Things can really change from Friday to Saturday, we know that Ferrari is still going to be there tomorrow, and Red Bull looks quick."

Vettel insisted that he pushed for the best possible lap time on Friday, and that overnight improvements would not "come for free". 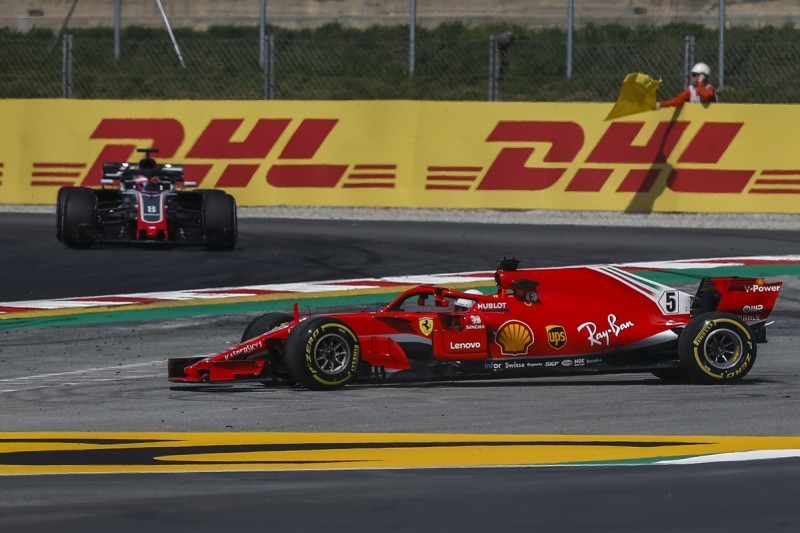 "You always try to go as fast as you can," he said. "Usually we're able to find some performance overnight so we'll try to do the same for tomorrow.

"It doesn't come for free, we have to work for it.

Vettel said the updates brought by Ferrari to Spain - which included the mounting of the mirrors to the halo and tweaks to the SF71H's floor - all "seemed to work".

"The car's OK, the updates are working, I can feel the car is better," he said.

"The biggest change came from the tyres, they seem to be quite a bit different."

Pirelli has elected to bring tyres with a thinner tread to Barcelona - as well as the Paul Ricard and Silverstone F1 races later in the year - and Hamilton said he, like Vettel, noticed the difference with the Spanish GP specification.

"I think the race is going to be interesting, just with the tyres," he said.

"We've got much different tyres this weekend, given that there's less rubber on them, so they're feeling just different, sliding a lot more."