McLaren has introduced several new parts for the Renault-powered MCL33 at Barcelona, including a striking new nose that has caught attention since it was seen in public for the first time on Thursday.

Although Alonso finished second practice down in 12th position - 1.7 seconds off the pace - he said the upgrade package was a clear step forward.

"It's much better," said Alonso of the car. "It was a step forward. I felt better, I felt more grip.

"I think the conditions were tricky today with the wind and with the hot temperature.

"But I felt the car better so definitely a step forward. We'll see tomorrow how much we've improved compared to the others."

The Spaniard, who is yet to qualify in the top 10 this year, added: "Overall I think we are little bit more competitive than any other Friday, so hopefully Q3 tomorrow for the first time is a real possibility".

Alonso believes McLaren has gained at least two tenths thanks to the aero package, but he refused to predict if that was enough to get closer to its rivals as they have also introduced new parts.

"I don't know what they've tested, so it's all absurd calculations," he added. 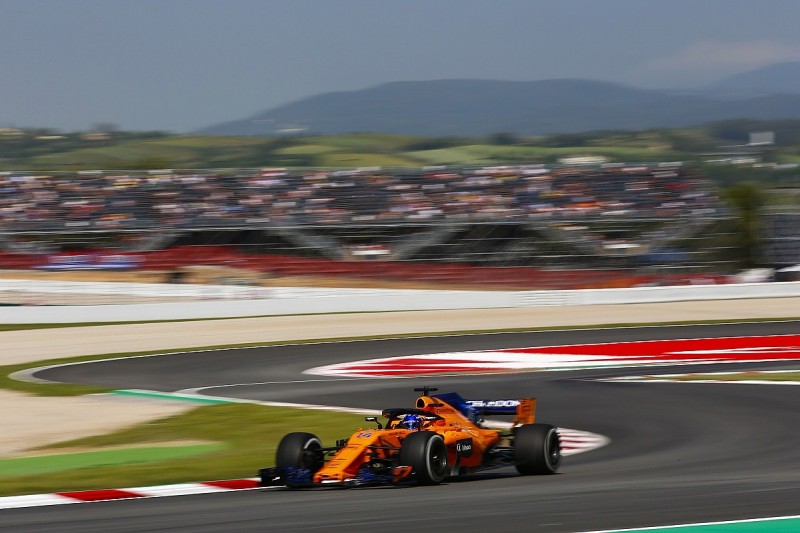 He admitted that McLaren's update package had arrived later than he would have hoped.

"This should have been the car in Australia. There was a delay, definitely," Alonso said.

"Here it's obviously a good update and we'll have more in Monaco, in Canada so we are a little bit behind schedule on updates, but the important thing is that the new parts are coming every race from now on and we put some performance in the car."

Team-mate Stoffel Vandoorne was ninth quickest in second practice and positive about the improved handling of the car, but said McLaren had to wait until qualifying to know if it had taken a real step forward.

"It's still very early to say," Vandoorne added. "Until we've done qualifying, put everything to the limit, then we won't really know exactly. The feeling today was positive with everything we've run through."