Hamilton ended the Spa weekend 29 points off Mercedes team-mate Nico Rosberg after a collision on the second lap of the race.

Mercedes publicly reprimanded Rosberg for his part in the collision, and Hamilton subsequently went on a run of five consecutive grand prix victories to turn that deficit into a 24-point advantage heading into the final two races of the season.

The British racer went on to clinch the crown comfortably with victory in the double points Abu Dhabi finale, but revealed during Sunday's AUTOSPORT Awards that Spa had been the defining moment of his campaign.

When asked to pin point his key moment of 2014, Hamilton replied: "Naturally it was Spa.

"Not getting to the finish line in the first race [in Australia] after all the winter training was tough, but me and the guys just kept pushing and working hard though all the problems - staying close and lifting each other's spirits.

"When we had the troubles in Spa, it was 'do or die' after that!"

Hamilton said winning his second world title also vindicated his decision to quit McLaren and join Mercedes at the end of the 2012 season.

"A lot of people doubted the decision I made to move to this team, but when I sat with Niki [Lauda] and Ross [Brawn], who explained all the changes and plans for the future, I knew straightaway they had the right plans in place," Hamilton said.

"When I joined I never thought we'd be winning and dominating as fast as we have.

"I'm really fortunate to have the best team and the best car - we did an amazing job together." 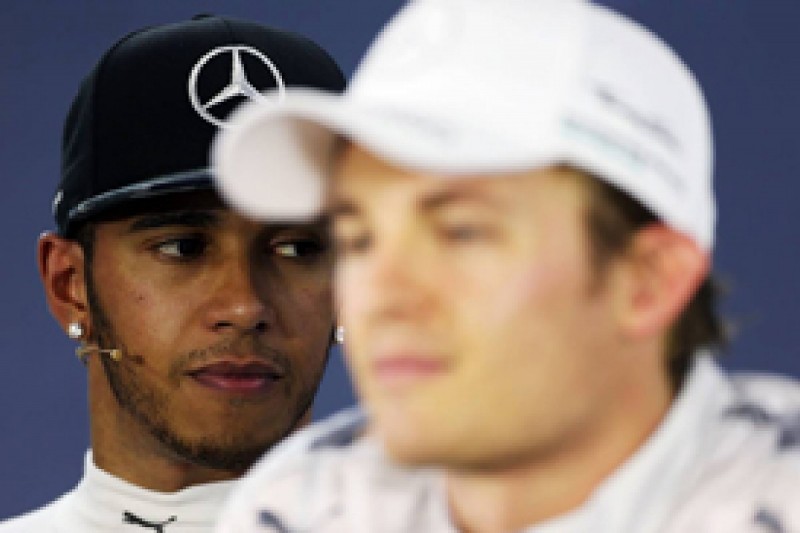 Hamilton's rivalry with Rosberg has caused tension in the Mercedes team this year, but the Brit said he was looking forward to renewing that fight in 2015 as he attempts to match his hero Ayrton Senna's tally of three world titles.

"I had an interesting time with Nico through the year," Hamilton added.

"He was the up-and-coming kid there, racing with the top team CRG, while I was racing with Top Kart.

"We had an amazing race together - we were much better friends back then for sure!

"It's an intense battle with a team-mate who's got the exact same car as you, who is sitting opposite you; I wish you could see the mind games that go on!

"I had a great competitor in Nico - I look forward to racing him next year."