Charles Leclerc says he will “think twice” about driving historic Formula 1 cars again in the future after crashing one of Niki Lauda’s classic Ferraris in Monaco.

Leclerc was taking part in a demonstration run at the 2022 Monaco Historic event last Sunday when the 1974 Ferrari 312B3 suffered a brake issue.

The 2022 Bahrain and Australian GP winner was on his third lap when he lost the rear of the car into the famous Rascasse right-hander, ending up in the barriers.

His team-mate Carlos Sainz said on Thursday that he wouldn’t want to take the risk of driving a historic car while Ferrari were in the title fight.

Despite his crash, Leclerc said it was “always an honour” for him to drive historic cars and that “it’s also part of our job and sometimes we need to go into those cars.”

He said: “To be honest before that I think all the checks that had to be done was done.

“Obviously there was a shakedown of this car the Thursday before and yeah, the failure that happened was on a screw of the brake pads and it’s impossible to know.

“So fighting for a championship like this, I will think twice about doing it again in the future, but yeah, it’s also part of our job and sometimes we need to go into those cars.

“It’s always also an honour for me and I’m always very happy and very glad to be driving those cars and always a pleasure too. 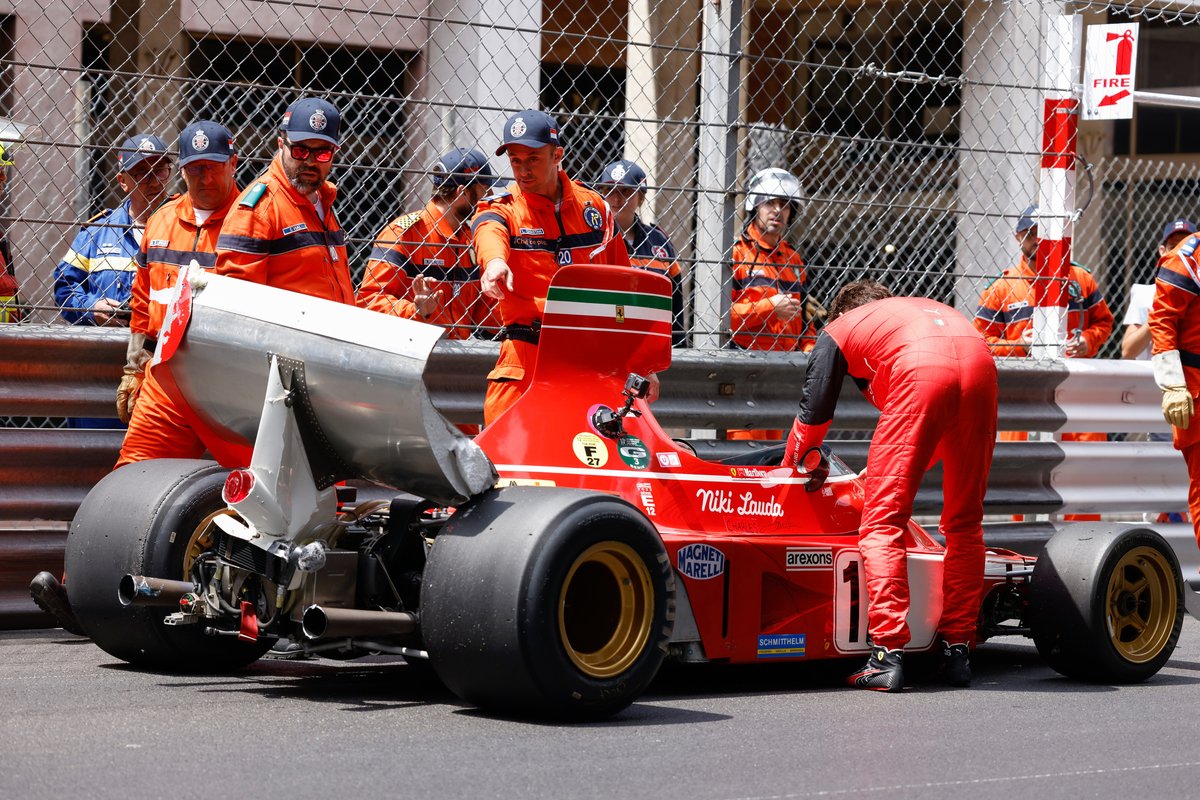 Charles Leclerc, Ferrari 312 B3 after the crash

“But yeah, it’s always a balance you need to find and of course when you are fighting for the championship, or just overall, because it’s for safety in general.

“I had a lot of fun and this was unfortunate but again, it was just unlucky.”

But he said he had more fun in Lauda’s car due to the 312T4 running on museum tyres.

Leclerc said: “Niki’s one was amazing until the failure, it was a bit less amazing there, but to be honest the one of Gilles that I drove had the museum tyres, so I couldn’t push at all, they were very very old tyres and it was difficult to go over 100km/h.

The Ferrari driver, who leads the 2022 F1 drivers’ standings after five rounds, said he feels an emotional connection driving historic cars and said it’s “great to experience what it was like and what it’s like now.”

He added: “Of course it is, they are drivers that I’ve never seen in real life, obviously now with social media you get to see a lot of their fights.

“You only appreciate how much risk they were taking once you actually get into one of their cars and see what was the safety that they had at that time and what it meant to be fighting wheel to wheel at those speeds with those cars.

“I think also it’s great to experience what it was like and what it’s like now, it’s very different now, it’s so much faster but it’s also so much safer and we don’t have the safety in mind as much as they probably did once they were racing.

“I got to meet Niki a few times in the paddock in the past and yeah, they are just legends of our sports, of course it’s always amazing to be driving their cars.”