© 2021 Motorsport Network. All rights reserved.
TV Tickets Fashion Giorgio Piola Jobs
Previous / Formula 1 teams could share designs instead of standard parts for 2021 Next / How one team is getting eight more GPs of running in 2019
Formula 1 News

Ferrari was not expected to challenge for honours in Singapore and its lead car was 0.8s off the pace in Friday practice, but Leclerc improved his own fastest time on the opening day by almost two seconds in FP3.

Leclerc spent most of FP3 on top, setting the pace in the early runs as Mercedes' drivers used medium tyres instead of softs.

A red flag around the halfway mark, caused by Sergio Perez clouting the wall exiting the final chicane with his right rear and leaving debris on the track, interrupted the next round of qualifying simulations.

After that stoppage, Valtteri Bottas briefly went fastest for Mercedes on a 1m39.166s, but as that was slower than the fastest time from Friday, it was never likely to remain the benchmark.

Leclerc swiftly reclaimed top spot with his low-1m38s, a time only Hamilton came close to matching - after the championship leader recovered from a spin at Turn 3 just after exiting the pits.

Sebastian Vettel, who led Ferrari's effort on Friday, was third-fastest and 0.619s slower than Leclerc. 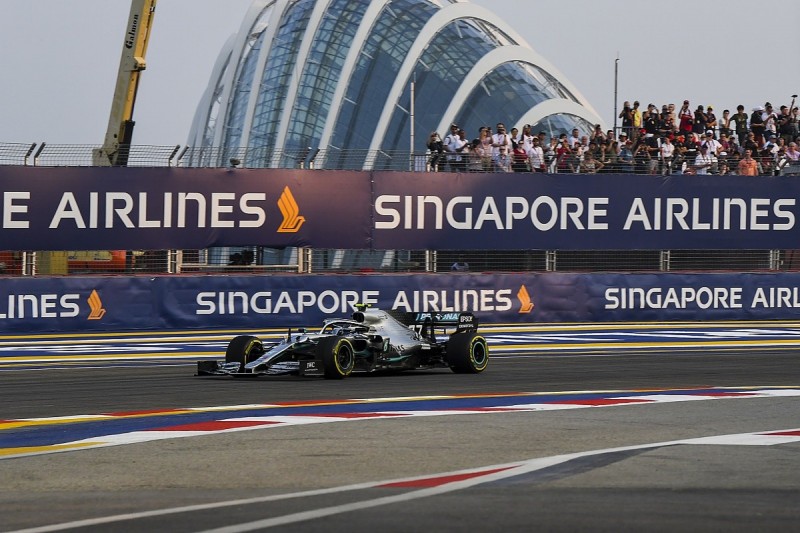 Bottas improved on his brief table-topping lap to end up fourth on a 1m38.885s, just behind Vettel.

Verstappen was third quickest, 0.2s slower than Bottas, on the penultimate runs but a messy lap and then traffic prevented him from improving.

Perez's smack against the wall was the only contact-related incident of note in the session.

Daniil Kvyat failed to set a time after aborting a lap early on with smoke starting to appear from the back of his Honda-powered Toro Rosso.

Kvyat suffered an oil leak and will switch to a different engine for qualifying, but will not incur a grid penalty as it is a previously-used power unit.