The Mugello race had to be red flagged when a number of cars, including Latifi's Williams, were eliminated after crashing into each at the first safety car restart.

The incident was blamed on cars at the back of the pack accelerating to try to get a good getaway, while those ahead had to brake because race leader Valtteri Bottas held off on his restart until the last moment.

After the race, a number of drivers suggested that one of the trigger points for the incident was that the lights on the safety car had turned off so late - leaving Bottas with no option but to delay his restart until the last second.

But Latifi, who joined Carlos Sainz Jr, Kevin Magnussen and Antonio Giovinazzi in being eliminated in the chain reaction incident, thinks that the timing of the safety car lights had nothing to do with it.

ANALYSIS: The key questions about the Mugello F1 restart crash 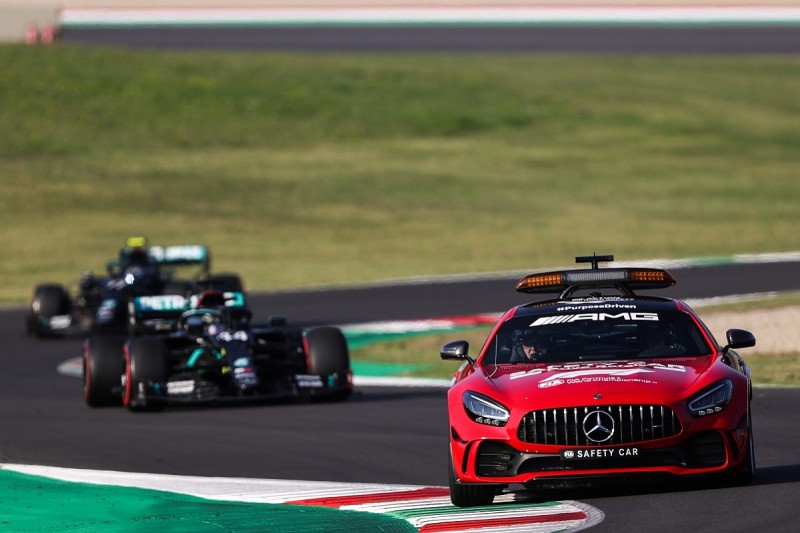 "When the safety car lights go out too late when you're the leader, you always want it to come off as early as possible so you can just start controlling your pace," said Latifi.

"At the same time, with Valtteri in the lead, I'd be very surprised if he went earlier if the safety car lights went off earlier. For me, he would have waited to still be as late as he did because you want to minimize the slipstream effect.

"So let's say even if the car lights went out at the beginning of the lap, and then he had a whole lap, I guarantee you he would probably still want to go at the same place, because that would have been the smart thing to do."

Latifi believes that the way to avoid repeat incidents in the future is to perhaps make special arrangements regarding restart procedures at tracks which have the potential to be troublesome because of their layout.

"Going forward, I think maybe on a case by case basis on certain tracks, so mainly here, if we come back, and a track like Baku, maybe they just have to think about implementing something a bit different," said the Canadian.

"It's a difficult judgement to make. But definitely, I think there has to be, let's say, a bit more discipline from all the drivers in situations like that, too.

"Not be nose to tail in case something like that happens, but to keep a reasonable gap. Because I truly think the accident was caused by some drivers in the mid-pack leaving too big a gap and accelerating flat out into that gap thinking 'Oh, now I've got to get close because the race is about to restart'."