Raikkonen was the only one of that quartet to improve during their final runs in Q3 at Interlagos, which vaulted him from sixth to third in the final classification, behind only the dominant Mercedes of Lewis Hamilton and Nico Rosberg.

Raikkonen has shown improved form on Saturdays recently in F1, and has now outqualified Vettel at the last four races in succession.

Ferrari congratulated the Finn on a job well done after the session, but Raikkonen admitted over team radio to being surprised the lap was good enough for third on the grid.

"I struggled the whole qualifying with a few corners in the middle sector," he explained.

"We're lacking downforce compared to the guys in front.

"I struggle in the first two corners with tyre warm up. In the middle, I wasn't happy either, but I don't mind, it was good enough for this.

"The car has been behaving today pretty good, just struggling a bit in the right corners to turnaround the car, and [with] front locking. It's been a bit of guessing.

"To be honest, the last lap was pretty average in my view, but it was enough to be third.

"Mercedes seem to be a bit too far [in front] - even if we made the perfect lap it wouldn't be fast enough."

HAMILTON: I HAD ROSBERG COVERED 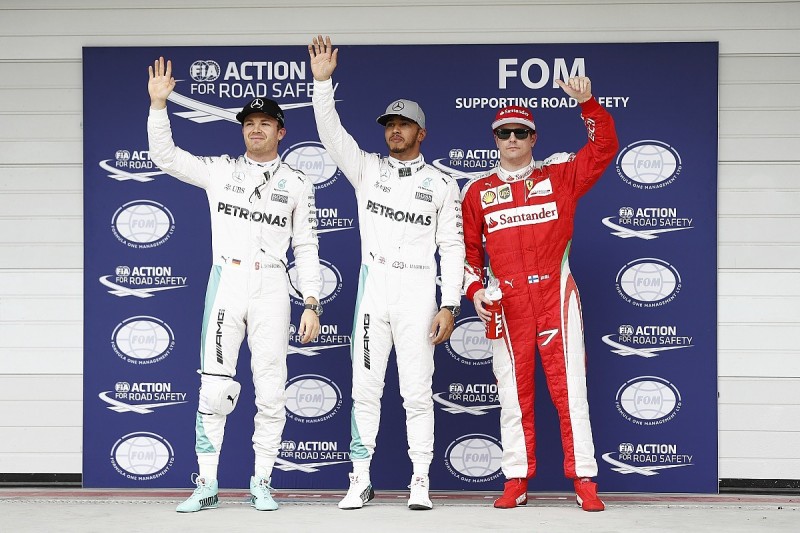 Raikkonen was almost seven tenths adrift of Hamilton, who claimed the 60th pole position of his F1 career by edging out title rival Rosberg by 0.102s in Q3.

After leading the way throughout Friday practice, Hamilton trailed Rosberg in practice three and was almost defeated in qualifying too, until Rosberg dropped time in the final sector of his best lap.

"I felt quite comfortable in qualifying, as I have done all through the weekend," Hamilton said after giving Mercedes a record 19th pole of the year.

"Nico has been getting quicker and quicker, but I've generally had him covered.

"It's remarkable what this team has done, to have that many pole positions - it's a true showing of incredible teamwork from everyone.

"This is the best I could have hoped for coming to Brazil.

"It's only my second pole here - it's always a track I struggle at, so I'm really happy to be up at the front."

Rosberg can clinch the championship with victory in Sunday's GP, and says he will attempt to overtake Hamilton into the first corner, rather than settling for second and extending the title race to the season finale in Abu Dhabi.

"That's the plan. It won't be easy. The run to Turn 1 is very short, so that doesn't help, but I'll try everything I can."

Ocon gets grid penalty for impeding Palmer in Q1 in Brazil