The FIA set up a 10-man panel to review the circumstances of the accident, in which Marussia F1 driver Bianchi suffered severe head injuries.

It recommends yellow flag rules be revised for 2015 so that speed limits are enforced in yellow flag zones.

F1 has already taken steps towards this by trialling a 'virtual safety car' system during the final three races of 2014. Its full introduction for '15 has been approved.

The panel's report into the crash says that Bianchi "did not slow sufficiently to avoid losing control" when he crashed while marshals were recovering Adrian Sutil's stranded Sauber in the closing stages of October's wet Suzuka race.

It goes on to say: "if drivers adhere to the requirements of double yellow flags then neither competitors nor officials should be put in immediate or physical danger".

The report also rules out the idea of implementing closed cockpits on F1 cars, or wrapping mobile cranes in skirts.

"It is not feasible to mitigate the injuries Bianchi suffered by either enclosing the driver's cockpit, or fitting skirts to the crane," the report stated.

"Neither approach is practical due to the very large forces involved in the accident between a 700kg car striking a 6500kg crane at a speed of 126km/h.

"There is simply insufficient impact structure on a F1 car to absorb the energy of such an impact without either destroying the driver's survival cell, or generating non-survivable decelerations.

"It is considered fundamentally wrong to try and make an impact between a racing car and a large and heavy vehicle survivable.

"It is imperative to prevent a car ever hitting the crane and/or the marshals working near it." 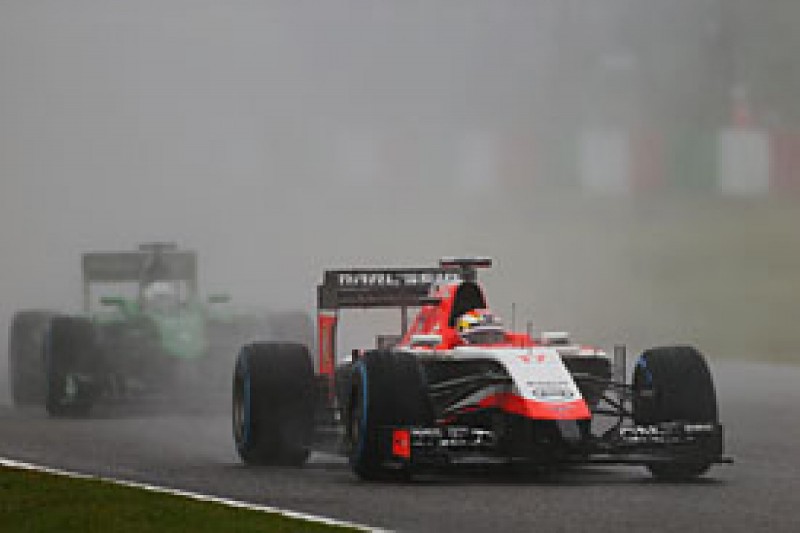 The report says all correct safety procedures were followed at the Japanese GP, but suggests a number of other measures to help safeguard against a repeat accident.

The panel recommends mandating that F1 races should not start no later than four hours before sunset - unless the event is a night race - to ensure visibility does not deteriorate unduly.

Although stressing the quality of the rubber made no contribution to the accident, the FIA panel also says the F1 tyre supplier should be granted an annual wet tyre test, to ensure its technology is the best available for any given season, and recommends the guidelines on circuit drainage be reviewed.