Jolyon Palmer: It can't get any worse than Azerbaijan Grand Prix

The Renault driver crashed in first practice and was forced to miss Friday afternoon, then did only a few laps in practice three before a fuel leak and fire stopped him and caused him to miss qualifying.

He started the race 20th, but after experiencing a misfire on the way to the grid he had to stop just seven laps in.

Speaking to TV crews after the race, Palmer said: "There's nothing I can do about it.

"Obviously the pressure's on, it's not been a good start to the season.

"When you miss a practice, you miss a qualifying, and you barely do the race, it can't get worse than this.

"I've said this a few times this year, but I'm really confident and hopeful that this will be the end of our bad luck now, get to Austria, get some points, get some good results on the board." 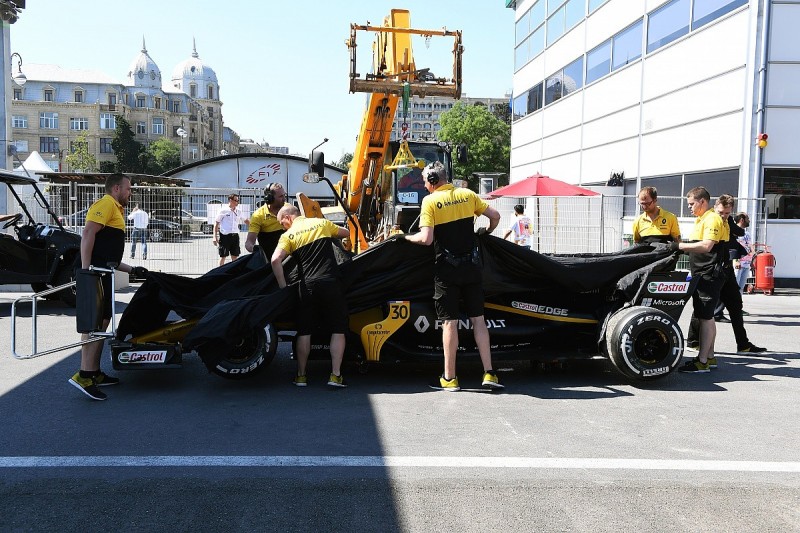 Palmer added that he needs to get a better understanding of how to get the best out of the 2017 breed of F1 cars, highlighting that his new team-mate Nico Hulkenberg has been on "another level".

"The cars have changed a lot since last year so the driving style of it is pretty different," Palmer said.

"With Kev [Magnussen in 2016], he was also doing a great job especially earlier in the season, but I matched him, and then in the end was quicker in the last third of the year.

"Nico at the moment is just doing a super consistent job and he's achieving, I hope, the maximum from the car all the time and he's not making mistakes.

"I would say at the moment he's another level on and it's something I need to dig deep in myself.

"That's the level I need to reach, I'm pushing to do it, obviously to be consistent, and to be quicker as well.

"And also to understand this car better because the way I'm driving it is not working with this car at the moment very well."