The Briton was one of only two men to set a timed lap in the first four hours of 2014 testing, with Mercedes one of only five teams to venture out on track.

His session ended in the barriers however, as a front wing failure pitched him off at Turn 1.

Red Bull, McLaren, Williams and Caterham are all yet to run, while Marussia is not expected to do so before Thursday after opting to hold its car in the UK to work on a technical glitch.

In the collective absence of those squads, it fell to Hamilton and Toro Rosso's Jean-Eric Vergne to set the majority of the running during the morning.

Sauber, Force India and Ferrari also ventured out, although the latter pair both had to abort their first runs as Sergio Perez and Kimi Raikkonen stopped out on track.

Ferrari did at least return to the circuit, with the Finn - returning to the team he won the world championship with in 2007 - managing one further installation lap before midday.

Vergne and Hamilton, in contrast, soon moved onto slightly longer runs, with the Briton setting the pace. 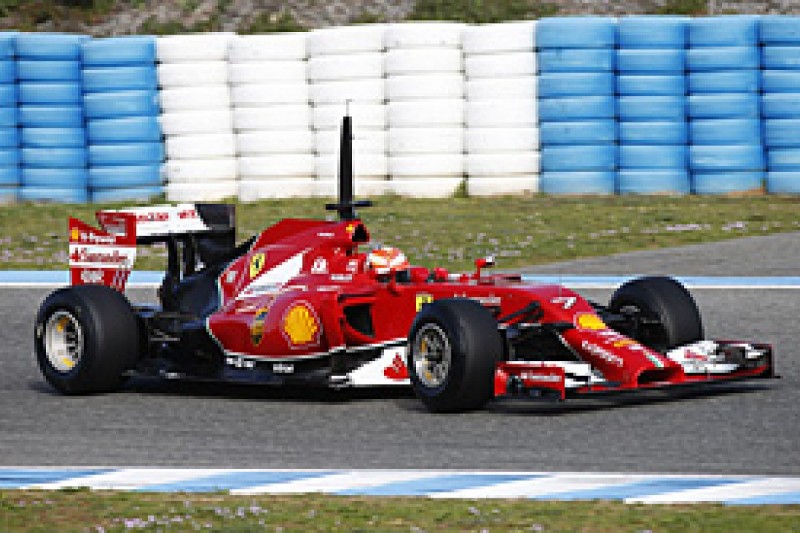 He had just dropped that down to a 1m27.820s when, moments after crossing the line, he suffered a front wing failure that pitched him into the Turn 1 barriers.

Hamilton was able to extract himself from the car, which suffered substantial damage and returned to the pitlane on the low loader.

Vergne couldn not get near Hamilton's pace - his best lap in the Toro Rosso STR9 was more than eight seconds adrift - but did manage the longest stint of the morning, a five-lap run which included three successive personal bests.

At midday therefore just 34 laps had been completed collectively, and not all of them under the drivers and teams' own steam.