Alonso spent much of the morning fourth fastest as Ferrari conducted a different programme to its rivals, even running the wet Pirelli tyre while others were using the intermediate rubber.

But just before halfway through the day's running, Alonso recorded a 1m35.334s lap at the start of a longer run on inters.

Despite the Ferrari's pace, it was Rosberg's Mercedes that really impressed during the first half of day four.

Although there was light rain and a wet track when the session began, Rosberg went straight out. After several in/out-laps he then started more serious running.

His 1m38.957s effort in the first hour put him well clear of the pack. McLaren's Kevin Magnussen, who was quickest in the dry on day three, and Felipe Massa's Williams edged closer to that mark before Rosberg started a long run.

During an apparent race simulation, which included three pitstops, the Mercedes consistently lapped between 1m37s and 1m41s as the inters went off on the drying track. He also set a best of 1m36.951s.

The Mercedes W05 completed a total of 91 laps, around twice as many as the next best.

Behind Magnussen and Massa, Daniel Juncadella made it four Mercedes-engined cars in the top five on his first run of the test in the new Force India, although his 1m41.132s was almost two seconds down on the Williams. 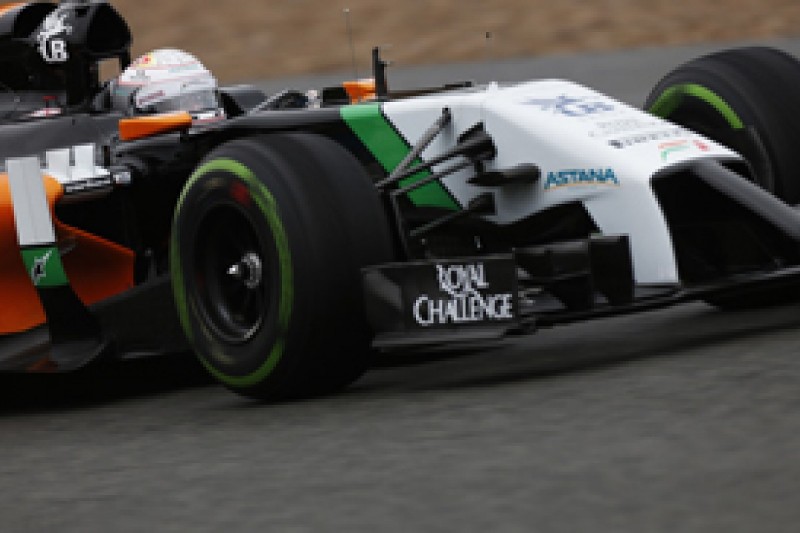 The Mercedes DTM driver impressed with his consistency in tricky conditions and was well clear of F1 returnee Kamui Kobayashi in the Caterham CT05.

All three Renault teams made it out early, despite the problems they have had this week, but Toro Rosso (with Daniil Kvyat) and Red Bull (Daniel Ricciardo) only managed eight and seven laps respectively.

Adrian Sutil's Sauber split Kvyat and Ricciardo and managed 42 laps, but the Sauber was once again some way off the pace.

Jules Bianchi had his first run in the Marussia MR03, completing five laps and setting his 1m48.192s relatively early on.

After five red flags on day three, the first half of day four took place with no stoppages.