Polesitter Mark Webber passed Romain Grosjean late on to secure a Red Bull one-two, but fell seven seconds short of denying Vettel and securing what would have been a first victory of his farewell F1 campaign.

Fernando Alonso meanwhile finished fourth, ensuring that Vettel must wait until India at least to be crowned a four-time champion.

It was Grosjean's Lotus that captured the lead at the start, jumping from fourth into the lead as both Red Bulls got poor starts.

The Mercedes of Lewis Hamilton also got the jump on the Red Bulls, but as he squeezed in between the two RB9s he and Vettel brushed, puncturing Hamilton's rear right and causing floor damage which would ultimately lead to his retirement after just nine laps.

In the background, Giedo van der Garde and Jules Bianchi collided at Turn 1, with the incident set to be reviewed after the race.

For the first half of the race Grosjean was able to maintain his advantage over Webber and Vettel, with the trio easing away from a chasing pack led by Nico Rosberg and the Ferraris of Felipe Massa and Fernando Alonso.

The group lost massive time through the first round of stops when Daniel Ricciardo, who started on the hard compound and ran a deep first stint, managed to jump into fourth and hold a string of quicker cars at bay for several laps.

It was Sauber's Nico Hulkenberg - who jumped the Ferraris through the first round of stops - who eventually managed to break Ricciardo's resistance, but by then the top three were 27 seconds down the road and out of touch.

That allowed Vettel, Grosjean and Webber to adopt wildly different strategies, with the latter opting for a three-stop plan in contrast to the two-stops of Vettel and Grosjean.

Webber therefore held track position heading into the final 10 laps, while Vettel was able to go far deeper than Grosjean in his middle stint, and therefore had much fresher tyres on which to close a two-second deficit to the Lotus man.

The crucial pass came on lap 41 when Vettel attacked at Casio and then dived down Grosjean's inside at Turn 1 for second.

With Webber pitting one lap later, Vettel duly hit the front and was able to cruise home to extend his winning streak.

That he did so owed much to Grosjean however, whose spirited defence kept Webber - now on the option tyre for a final 10-lap charge - at bay until the final laps, when Webber picked him off at Turn 1 to secure second.

Behind, Alonso executed a great pass around the outside of Hulkenberg heading into Turn 1 to clinch fourth and keep the title race technically open. 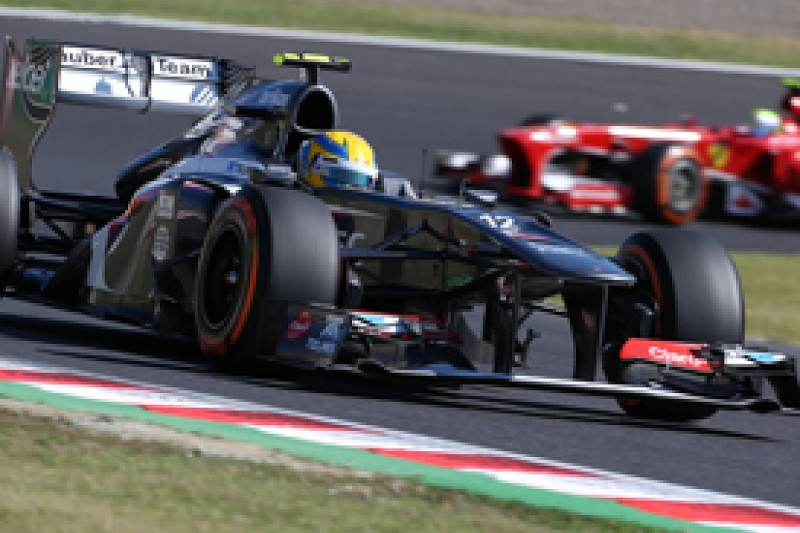 Kimi Raikkonen also picked off Hulkenberg's Sauber to seal fifth ahead of the German.

Esteban Gutierrez held on to deny Rosberg - hit by a drive-through penalty for an unsafe pit release - in a fight for seventh, while Jenson Button and Felipe Massa rounded out the top 10.

Massa also had to fight back from a drive-through for speeding in the pitlane, although his cause was also aided when Sergio Perez and Rosberg collided while fighting for 10th, sending the former to the pits with damage.

Paul di Resta beat Jean-Eric Vergne to 11th, while a third drive-through - this time for Ricciardo after he went off-track passing di Resta at 130R - meant the Australian was restricted to 13th ahead of Adrian Sutil, Perez and the Williams of Pastor Maldonado and Valtteri Bottas.