Is a blown wing trick part of Ferrari's Formula 1 advantage?

Quick through the corners and faster on the straights, Ferrari's SF71H certainly seems to be producing performance beyond the level its Formula 1 rivals expected

There has been particular intrigue about what Ferrari is doing with its engine.

So far the suspicion has been that Ferrari has unlocked something on its ERS that the others have missed, such as a battery trick or a use of the turbo, MGU-H or MGU-K in a different way.

But a new design avenue that the team tested at the German Grand Prix hinted the answer may not lie entirely with its power unit.

Did Ferrari's experiments with remounting its exhaust pipes near the rear wing suggest the possibility of a blown wing concept?

Closer analysis of wing set-ups suggests Ferrari has not had to trim downforce to achieve its straightline gains, and has even been able to run greater wing angles than Mercedes.

That raises the possibility of Ferrari finding a way to 'stall' its rear wing to help with a straightline speed advantage without hurting it in high-speed corners.

It wouldn't be the first time such a solution had been used to increase top speed. The F-duct in 2010, and the DRD (Drag Reduction Device, see below), were both introduced to achieve a similar benefit: reduce drag and increase top speed. 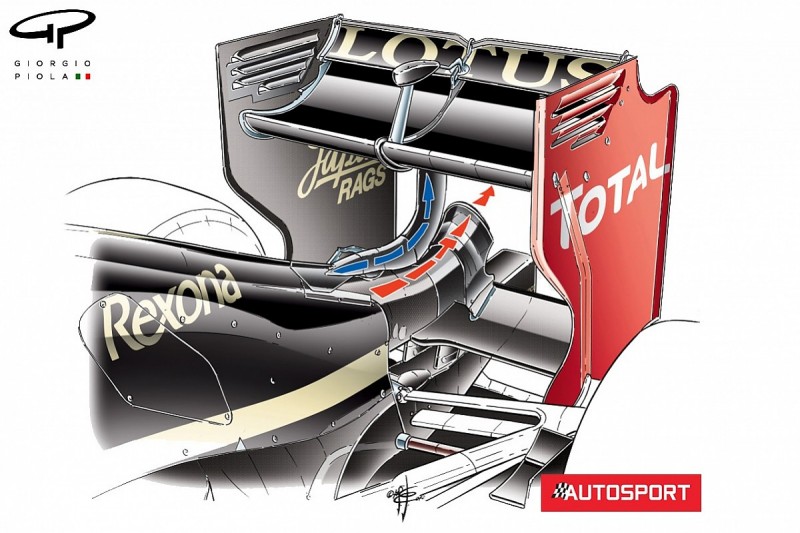 DRD was a passive device that tangentially blew the central section of the wing to 'stall' it. It wasn't as powerful as the F-duct and took a while to set up for each circuit.

Several teams, including Mercedes, Red Bull, Sauber and Lotus, had versions and spent time trying to make it work.

There seems to be some evidence to suggest that blowing the rear wing with wastegate pipes could be a way to achieve this aero benefit once again.

A technical directive issued in 2015 was of particular interest because it tried to clamp down on the possibility of using the then newly separated wastegate pipework to turn on and off an external system with a fluidic switch.

This was much like the one used for the F-duct, that would have allowed DRD to be controllable, rather than passive.

The technical directive was issued in response to a request from James Allison, then technical director at Ferrari and someone who had intimate knowledge of the F-duct and DRD designs from his time with Renault/Lotus.

Ideas that have produced performance in the past often get reinterpreted at a later date.

Ferrari could now have opted to use the gasflow created by the wastegate pipework as a method of disturbing the exhaust plume and localised airflow, which in-turn stalls the rear wing to increase the straightline speed.

Though other teams have wastegate pipework in roughly the same place as Ferrari, there could be differences in how the wastegate and MGU-H are mapped. 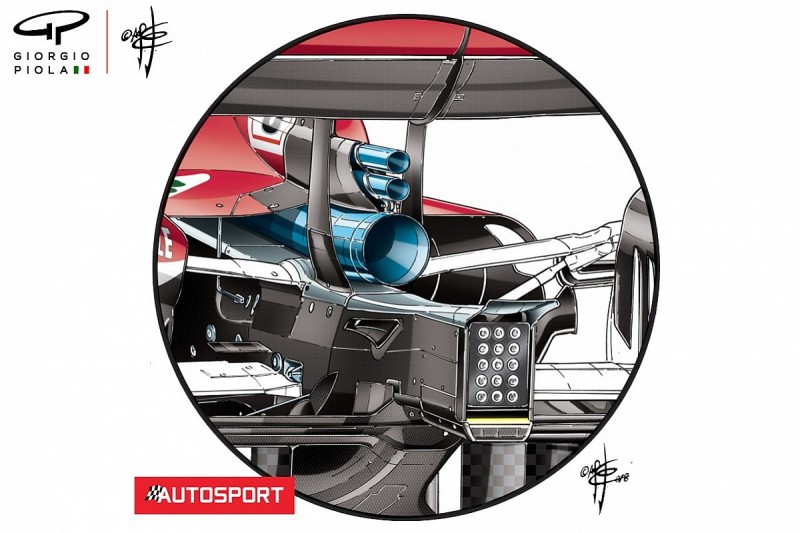 If Ferrari has found a way to use the wastegate and exhaust to stall the rear wing, more potential gains could be in the pipeline and the development tested in Germany could just be a stepping stone.

The update involved the wastegate outlets being inverted and placed on top of the main exhaust outlet, in closer proximity to the rear wing, while the rear wing itself not only had a revised leading edge when viewed from the front (below), but also a revised camber on the rear face.

Shots taken when the upgrade was being taken off the car made clear that the lower of the two wastegate pipes merges with the upper one solely for legality reasons - meaning it likely gets little flow, empowering the upper one. 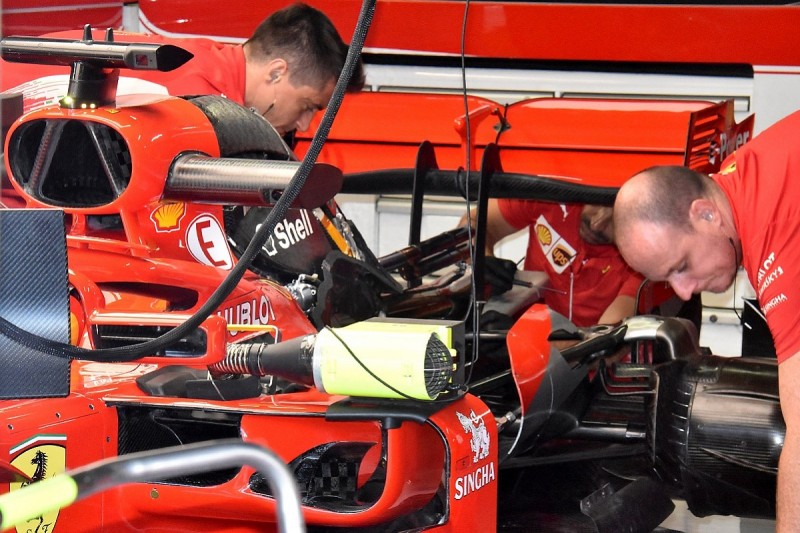 For now this is just a theory, as rival teams try to understand whether Ferrari's advantage comes from an unexplained advantage with energy recovery or by blowing its rear wing.

Why Ricciardo should trust in Honda