Sebastian Vettel, who had led the way for the Scuderia during the weekend, was quicker than the highest-placed Mercedes car in all three of the dry practice sessions, and headed into qualifying as favourite for pole position.

But as the rain intensified ahead of the Q3 shootout Hamilton seized the advantage, outpacing his rivals with a last-gasp effort on full wets to claim pole.

His team-mate Valtteri Bottas wrapped up a Mercedes one-two, while Ferrari was left with a second-row lockout.

"It's quite a shock, really," Hamilton admitted. "I was not expecting to be here [on pole], so very grateful for today.

"To get a one-two, particularly when we knew that we were not going to be getting pole here in the dry conditions, [as] the Ferraris were just too fast.

"But we all just focused on trying to do the best job we could, and maybe lock out the second row.

"So, for the heavens to open and for us to be in this position, it's such a blessing for us."

"I think we were lucky with the weather," Wolff conceded. "In the dry we didn't have the pace during the weekend.

"On the [intermediate tyre] it was even match and then straight on the heavy wets you could see we had a little bit of a pace advantage.

"This is one [where] we haven't expected to be in the hunt for the win."

Ferrari was on provisional pole, courtesy of Kimi Raikkonen, when the chequered flag came out in Q3, before Bottas and then Hamilton lowered the benchmark with their final efforts. 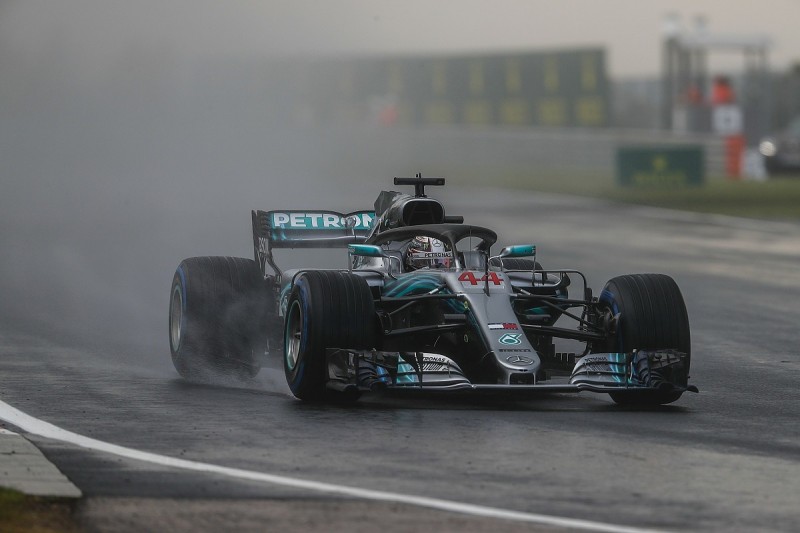 "As I went into the last lap, I knew I had to put together each sector and really pull something special out for us to overtake the Ferraris," Hamilton said.

"Collectively, I think it was a very good lap, particularly I would say the last sector. I don't know how it is on the sector times, but that's where I felt I really made the difference."

Bottas, who ended up 0.260s slower than his team-mate, said he was short of grip in the final corners of his decisive effort.

"[It] felt a very good lap for me, especially sector one, two, [they] felt pretty nice," he said.

"In these kind of conditions, when you go out you have one lap.

Track condition from each lap is different to another. So, for sure if you can do the lap again, you can find some things.

"I must say I left something on the table, and obviously Lewis was on pole with a similar car - so I look forward to investigating the data [for] what I could've done better."