Raikkonen, taking over the SF71H from Antonio Giovinazzi, first went quickest half an hour into the session on medium tyres before a flurry of improvements on softs took him down to a 1m16.502s.

Just before the mid-point of the morning session he emerged on softs again to post a 1m16.171s - just 0.001 seconds slower than team-mate Sebastian Vettel's official lap record, set on Saturday in FP3 using ultrasoft tyres.

That stood as the benchmark heading into the lunchbreak, with Robert Kubica second fastest on a 1m18.451s.

Kubica shot up the order when he finally posted a couple of representative times in the final hour, having earlier focused on a lot of development work for Williams.

The Pole, who has a strong fanbase here in Budapest for the test, posted a 1m19.376s on soft tyres before going almost a second faster on an ultrasoft tyre run. 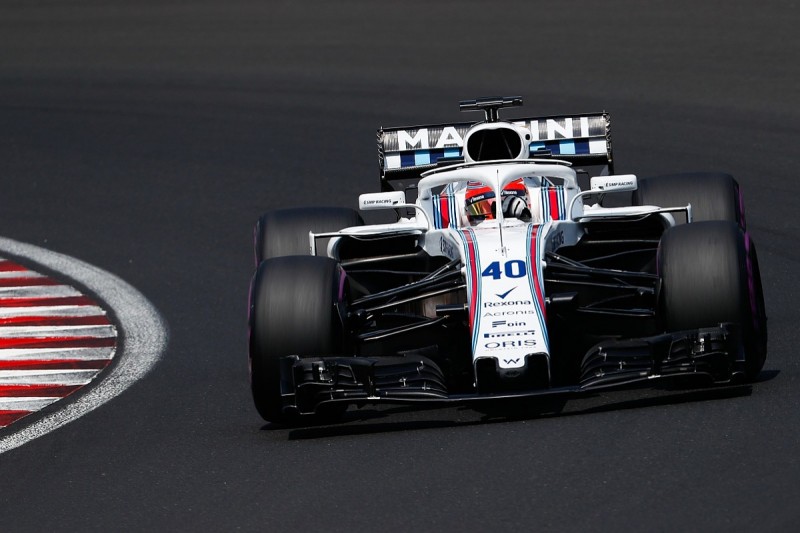 The time cannot be compared to Williams young driver Oliver Rowland's best time from Tuesday because the Briton did not set a fast lap, but Kubica's effort was faster than the best Williams time in FP3 last Saturday.

Kubica then completed another lap 0.004s slower than his best, also on ultrasofts.

McLaren's Lando Norris is next up on a 1m18.768s, with his eventual best coming with his car plastered with flo-vis paint.

That lap was half a second faster than he managed on Tuesday and three tenths slower than the fastest McLaren time over the grand prix weekend.

Norris's Formula 2 title rival George Russell finished the morning fifth for Mercedes and enjoyed a more productive start to his second day behind the wheel.

He was delayed by a gearbox problem on his W08 on Tuesday.

Giovinazzi swapped headline-grabbing lap times in the Ferrari for a midfield position with Sauber on day two of the test.

The Italian, back with the Swiss team he drove for in FP1 ahead of the grand prix, posted the sixth-fastest time, a 1m19.413s on softs.

That put him ahead of Nikita Mazepin, Force India's development driver, who missed more than half the session after stopping on track.

Mazepin had just gone third-fastest at the time, on a 1m20.016s, when his car crawled to a halt approaching Turn 1. He did not return to the track again before the lunch break.

The GP3 race winner's fellow Russian Artem Markelov was next up on the timing screens after a soft-tyre run in the final hour yielded a 1m20.054s.