The intention is to spice up grands prix by creating more strategic variety, but the regulations have even left some of the drivers confused.

Autosport drills down into the detail of what's new, and what is and is not allowed.

Is the total number of sets of tyres available over a weekend still the same?

Yes, this hasn't changed. There are still 13. In previous seasons there were seven sets of prime and six sets of option available over a weekend per driver.

Of the 13 sets now, two are chosen for the race by Pirelli - and could be of differing compounds (with three available per race, and not two). A set of the softest is also set aside for Q3.

Of the 10 remaining sets, teams/drivers choose what they would like from the three available compounds.

Of those 10 sets, are the ratios for each team/driver pre-determined?

No. The ratio depends on a team's strategy for the weekend. For example, if a team fails to send its choice to the FIA it receives a standard allocation of three sets of the harder compound, four of the middle, and three of the softer. It can play with any combination of the numbers dependent on set-up of the car, driver style etc.

Will teams still get an extra set of tyres for the first 30 minutes of first practice?

Previously one set of 'prime' only tyres was used for the opening half hour of FP1. This set came from the seven sets of primes available over a weekend. Now, one set of the 10 chosen by the team/driver can be used for the first 40 minutes. It means they have the option of running whichever of the three compounds available.

Can teams still use the softest compound available in Q1 and Q2?

Yes, providing they have chosen enough sets of the softest among their pre-selected 10 sets for the weekend.

Is the 'mandatory Q3 specification' effectively a qualifying tyre and can it be used in the race too?

It doesn't carry the name 'qualifying tyre', but as it is the softest of the trio of compounds available then it can effectively be viewed as such. And it can be used in the race too. Most likely top 10 cars will qualify in Q2 with this compound, therefore they have to start the race on it.

Does the stipulation that drivers have to start races on their Q2 tyres still apply?

Yes, as stated in the regulations, "at the start of the race each car which qualified for Q3 must be fitted with the tyres with which the driver set his fastest time during Q2".

We now know three tyre compounds will be made available for a race, but can all three be used in a race?

Do the same rules apply for the minimum use of a compound in each race?

The rules simply state "each driver must use at least two different specifications of dry-weather tyres during the race". So if it's one lap on a set of softs and 50-odd laps on a set of mediums, that's within the rules.

Does the 'mandatory race tyre specification' mean it's not really a free tyre choice?

There is a free choice because while Pirelli is selecting two sets of tyres for a race, there are still another 10 available for a team/driver to go as aggressive or as conservative as they wish.

Even if Pirelli nominates two different compounds for its mandatory race sets, teams still have a completely free choice from the three nominated compounds for their other tyres.

Do the early deadlines mean drivers are committing to tyre strategies months ahead of a race?

Effectively, yes, because with the new rules, teams/drivers must inform the FIA eight weeks before the start of a European event, and 14 weeks before a non-European race, the ratios of the three compounds they wish to use at that event, after being supplied with the options a week beforehand.

Will the super-soft, let's say, be the same compound everywhere, or are those names now generic to cover a range of options?

Pirelli has decided to retain the current names. They will always be associated with that particular compound.

Over the past two seasons Pirelli has slipped from its original mandate from when it entered F1 in 2011 of providing tyres that will ensure drivers have to pit at least twice in a grand prix.

Primarily that has been due to the introduction of the hybrid power unit, with the teams keen to focus on that rather than over-concern themselves on tyres, leading to Pirelli deliberatly designing tyres that had less impact on how races turned out.

It is hoped with the introduction of a new compound, to make five in total, and with teams able to use all three compounds available for a race, the possibility of different strategies will increase in an exponential way with two or three pitstops.

Are there any particular races that will be dramatically changed by this?

Pirelli believes all the races can potentially be very different compared to 2015, especially at the beginning of the season when all teams will likely struggle to apply the new rules, introducing a high level of uncertainty. 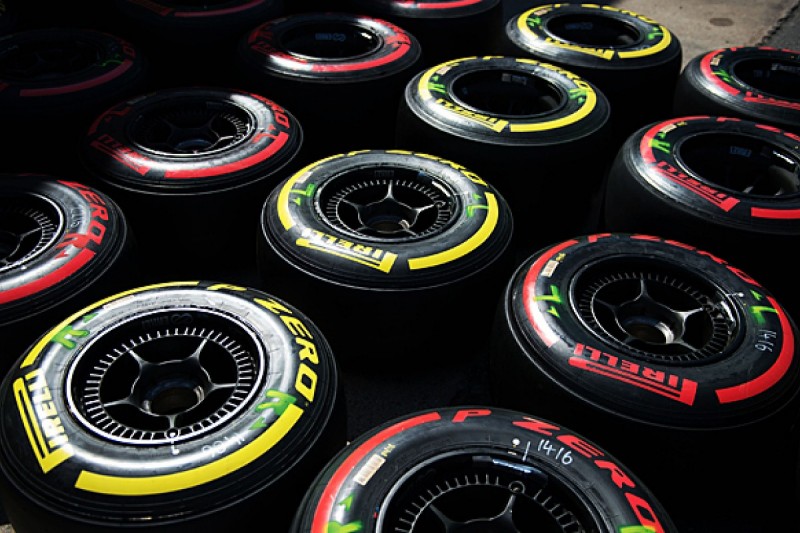