Formula 1 chiefs caused a stir ahead of last weekend’s Styrian Grand Prix when it was revealed that there would be a clampdown on ultra fast pitstops.

Concerned that teams had started to automate some of their processes, given the consistency at which the two-second stationary time was being met and even beaten, the FIA issued a technical directive that will take hold from the Hungarian Grand Prix.

The directive takes a swipe at the pitstop equipment and specifically a clause in the technical regulations – Article 12.8.4 - that stipulates “Any sensor systems may only act passively”.

The inference from this was that some teams may have stumbled into a grey area in that regard.

We know that the teams have systems that connect their wheel guns with the pit gantry and the traffic light system that signals the driver to commence his getaway when the pitstop is considered complete.

It’s at this point that the focus switches to whether these systems are ‘passive’ and the information is just logged: or that information is being used ‘actively’ to trigger the next phase of the stop.

This then opens up the debate about whether such behaviour has helped teams effectively exceed the typical human reaction time, which is measured at around 200-250 milliseconds.

If a team has a system that automatically triggers the next part of the pitstop as soon as a sensor detects it, then it can shave off the reaction time at each element of the stop: which can add up to a few tenths of a second.

These requirements will obviously slow the fastest of pit stops by a small margin, as some of the teams have clearly got to a point where they’d been operating beyond the new limits.

Clearly the team that has the most to lose with the new pitstop procedures is Red Bull, as it has had the quickest stop six times in the opening eight races.

Three of its stops have been below two seconds, a time that no-one else has troubled so far this season, with Aston Martin providing the quickest non-Red Bull stop with a 2.08s in Portugal.

It’s not just about the stop

The closeness of the field and the strategic impact of drivers being within each other’s ‘pit window’ is also putting more of an onus on the various phases of a stop this season too.

The error during Valtteri Bottas’s stop at the Monaco Grand Prix shows how even the smallest deviation can have dramatic consequences. 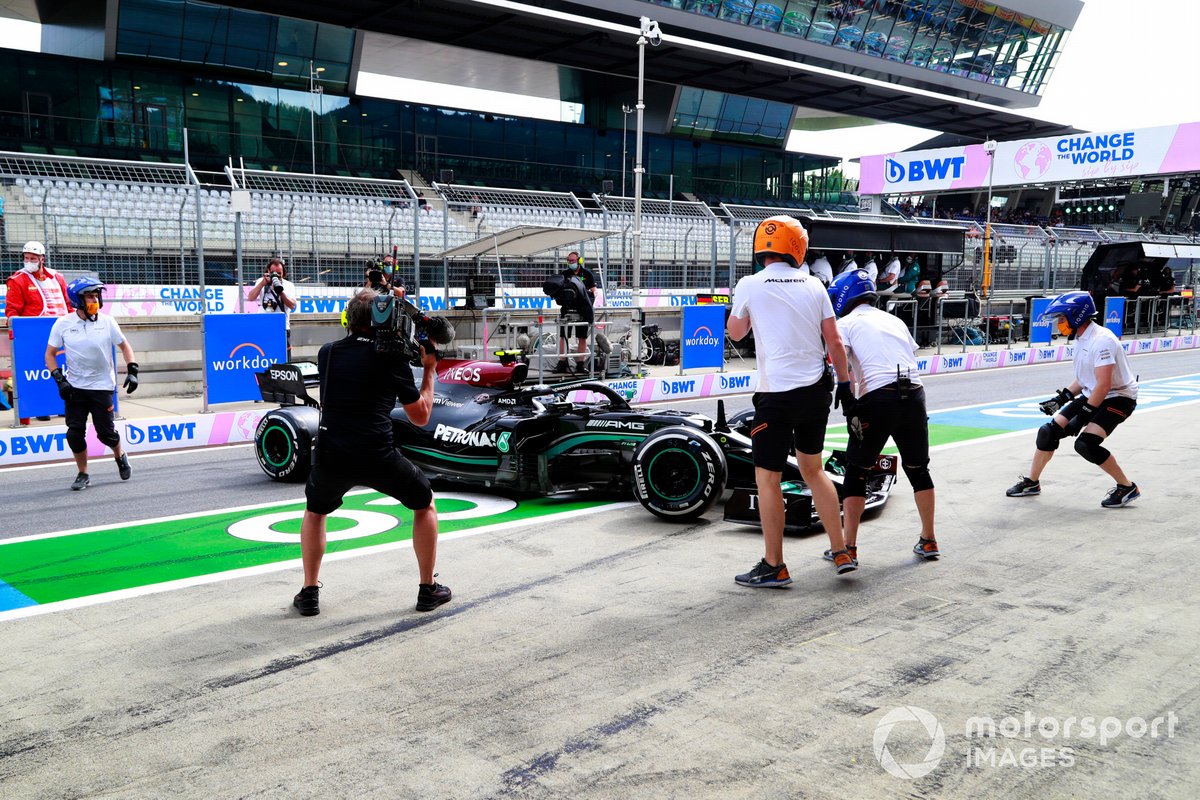 Bottas's pit lane spin in Austria also highlights a desire to improve the speed through the entire pit lane sequence, as tenths can be found in the braking and acceleration phase of the stop too.

Although the Finn’s experiment to pull away from the pit box in second gear ultimately failed and cost him a three-place grid penalty, it did give the team some of the answers it was seeking.

This was yet another attempt to claw back some of the losses that Mercedes feel it was accruing to Red Bull through the pitlane, with the team identifying the amount of wheelspin when exiting the pit box as a contributing factor to the time loss to Max Verstappen in France.

Fractions of a second all add up and, if these aren’t correctly factored into the pit stop delta - whether this is the entry speed to the pit lane entry line, the entry and stopping point in the pit box, the stop itself, pulling away after the stop or the removal of the pit limiter and exit from the pitlane after the pit exit line - you’ll simply haemorrhage time to your competitor.

That’s why we’ve started to see teams angle their pit boxes too, as they look to create a competitive advantage on their rivals.

The angle provides better alignment for the driver, especially if there’s more than one team out in the pitlane to service their drivers at the same time.