Motorsport would be nothing without the fuel that powers it, but how much a car can use, and when, makes up a big part of each series' regulations

Traditionally, high fuel consumption was deemed a good thing, proving that a car was being driven at the limit and that view is still shared by many petrolheads across the globe.

But increasingly efficiency, clean energy and sustainability is changing the face of motorsport with hybrid technology providing more and more power for the cars.

Different series take very different approaches to fuel usage and how they power their cars but across the board it is clear that this is an area of motorsport undergoing a process of transformation. 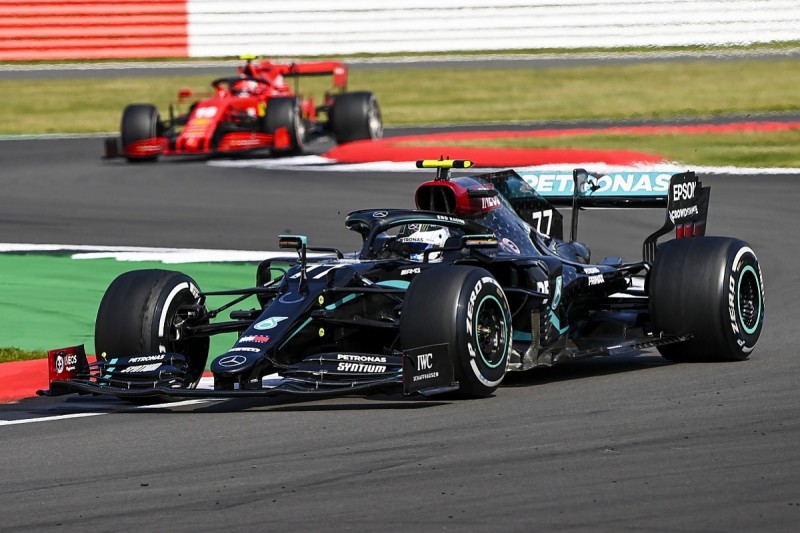 F1 cars can use a maximum of 110 kilograms of fuel per race (305km / 190 miles), however they don't always fill the car with that much fuel. This is because the more fuel a car starts with the heavier it is, and the more lap time it costs.

The amount of fuel an F1 car can use per race was increased to 110 kilograms in 2019 (an increase of 5 kilograms) in order to allow the drivers to push more of the time. The aerodynamics on the current generation of cars increase downforce and the resulting extra drag has upped fuel consumption across the grid which was leading to drivers struggling to reach the end of the race without using precautions such as lift-and-coast.

Fuel saving such as lifting off the throttle before the braking zone going into corners (lift and coast), as well as changing settings in the car to decrease fuel consumption stops the drivers from being able to go flat-out, somewhat neutralising the racing.

Since 2014 F1 cars have also had fuel-flow meters, monitored by the FIA, to ensure that the engine cannot consume fuel at more than the rate of 100kg per hour and the sensor checks the flow 2200 times per second. For the 2020 season, amid some controversy surrounding the Ferrari engine, the FIA introduced a second fuel-flow sensor to better police the rules surrounding fuel usage, with encrypted data to ensure that the teams cannot circumvent the measurements.

F1 regulations have had a massive push towards fuel efficiency in recent years. The 2020 Mercedes engine is now over 50% thermal efficient, meaning that over half of the energy in the fuel is used to propel the car, which is an increase from around 44% in 2014 when these engines were introduced. As a normal road car reaches only around 30% thermal efficiency this demonstrates the strides in efficiency in F1.

The Energy Recovery Systems (ERS) elements of an F1 car ensure that as much waste energy is recovered as possible, with the MGU-H collecting and deploying wasted energy from the turbocharger and the MGU-K recovering waste kinetic energy from the braking system. This focus on efficiency is an important part of F1's road relevancy. The limitation on fuel creates a quest to make the energy from it to go further and further, prompting breakthroughs that will benefit wider society. 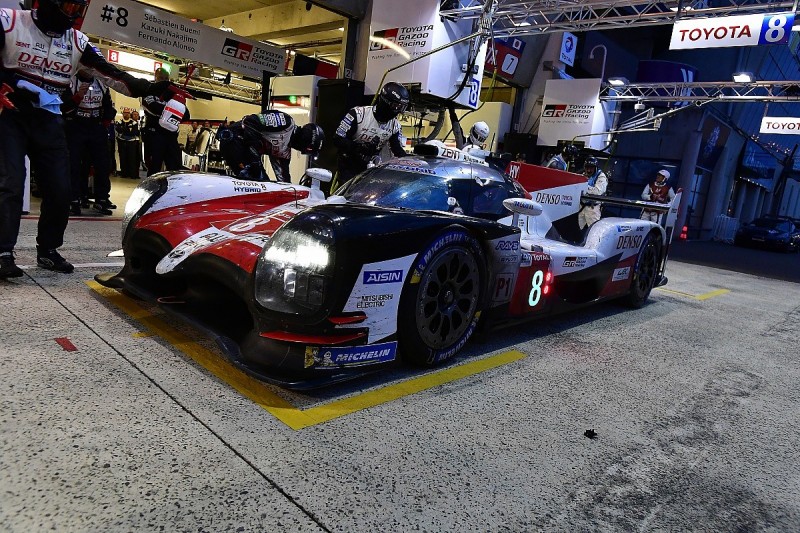 In the World Endurance Championship, Equivalence of Technology has been implemented since 2014 in order to level out the performance difference between the hybrid and non-hybrid prototype cars. Originally all the LMP1 cars had a per-lap fuel allocation limit, with a target that varied according to the race track, but from mid-2019 the rule has not applied to privateer teams in an attempt to close up the running.

Fuel flow meters measure both the amount of fuel used per lap and the instantaneous fuel flow. The fuel allocation for Le Mans is 80.2kg/hour maximum petrol flow for hybrid cars and 35.2kg per stint, with non-hybrid cars allowed a maximum petrol flow of 110kg/h and 52.9kg per stint. For other circuits the fuel allocation is worked out by multiplying the circuit length relative to Le Mans by 1.11.

During a 24-hour race a lot of fuel is used, with the 2015 winning #19 Porsche of Nico Hulkenberg, Earl Bamber and Nick Tandy going through 1896 litres on their way to the chequered flag. In 2017 Shell provided 270,000 litres of fuel for Le Mans, although not all this was used, as calculations have to be based on all cars racing for all 24 hours of the race. 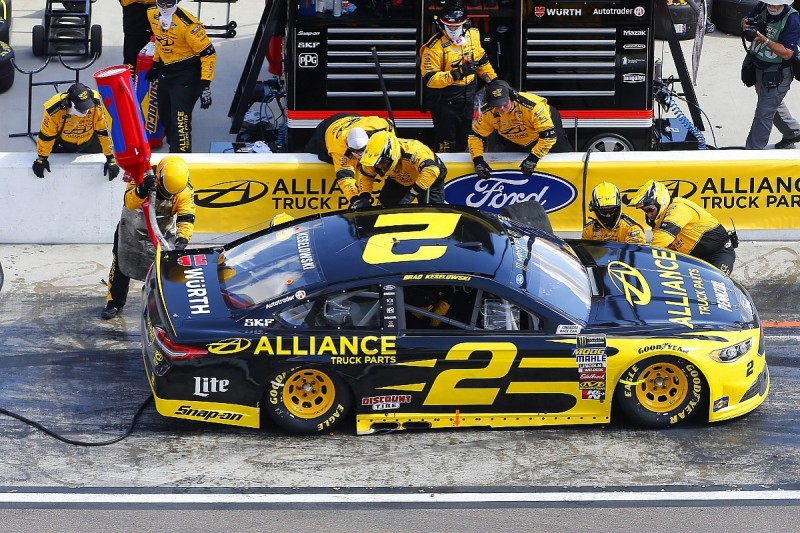 In NASCAR the situation is a little different, with the teams allowed to fill up with as much fuel as they want, with refuelling occurring during the races. The fuel cells in the cars hold approximately 18 US gallons, although the teams will attempt to put in as little as possible at a time in order for the cars to be lighter and therefore quicker.

In 2015 the 43 cars taking part at the Daytona 500 used an estimated 5375 gallons of fuel between them. 2020 winner Denny Hamlin pitted six times across the race, with his stops ranging in time from 16.32 seconds to a mere 3.84 seconds. Tyre changes aside, we can assume that the amount of fuel put in at each stop varied considerably, from a 'splash-and-dash' to a considerable refuelling. With the teams having so much control over the amount of fuel going into the car there is no real accurate measure of total fuel usage of a car in a race.

NASCAR is however planning on adopting regenerative braking in the near future, a move towards hybrid technology that risks alienating some of its more traditional fanbase. 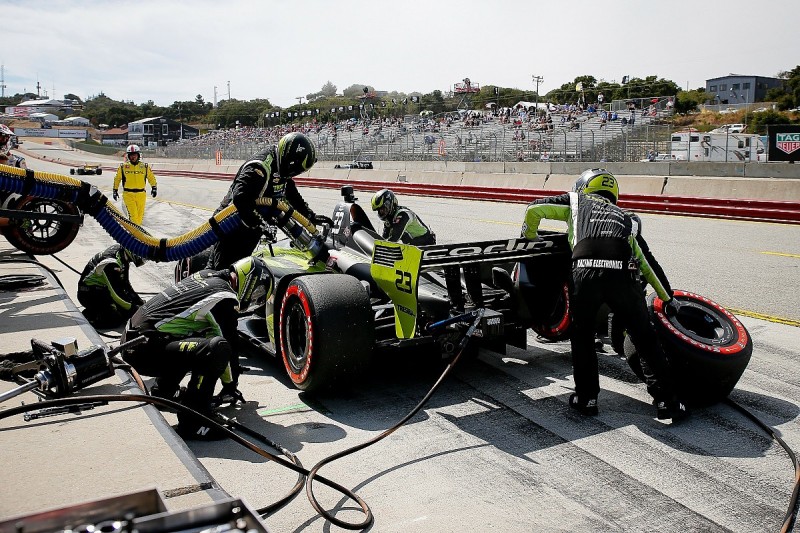 IndyCar has a similar approach to fuel usage, with in-race refuelling and no real limit on fuel usage. The fuel tank holds 18.5 US gallons and like Hamlin at the Daytona 500, 2019 Indianapolis 500 winner Simon Pagenaud stopped six times across the course of the race to take on varying amounts of fuel.

Indycar's 2022 engines will include hybrid technology in a bid to entice more manufacturers into the series with road-relevant developments. The system will include a multi-phase motor, inverter and an electric storage device creating energy recovery from the car's braking system. This will allow the engines to produce more than 900 horsepower, without using any additional fuel. 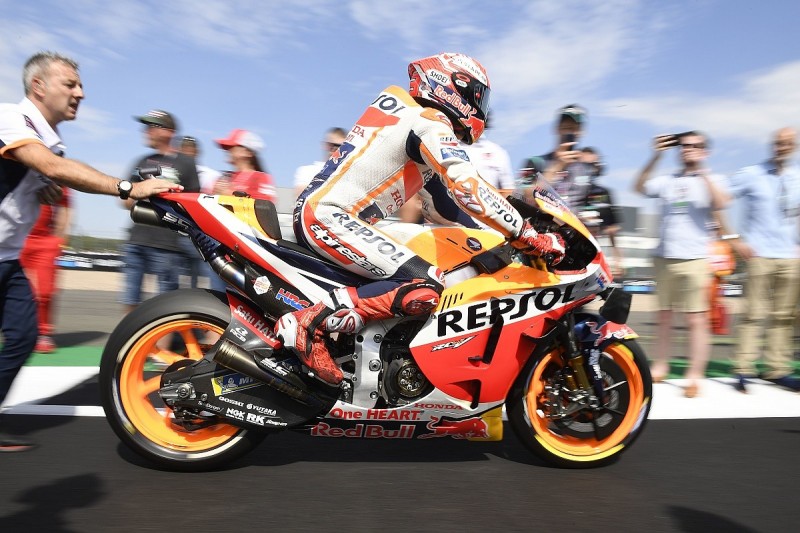 Refuelling during the race is prohibited in MotoGP so the teams have to fill the bike up with enough fuel to last the entire duration. The fuel tanks have a capacity of 22 litres and all of that fuel is used running at maximum power although, as a full fuel tank does weigh down the bike, teams can be strategic with the amount of fuel on board.

Unlike F1, where a maximum weight of fuel is mandated, MotoGP teams are allowed to play with the volume of the fuel in order to fit more into the tank. The teams can cool the fuel by up to 15 degrees below ambient temperature, thereby decreasing the fuel's volume and fitting more kilograms into the tank. Although this makes the bikes heavier, it also allows the riders to push for more of the race without worrying about running out of fuel before the chequered flag. 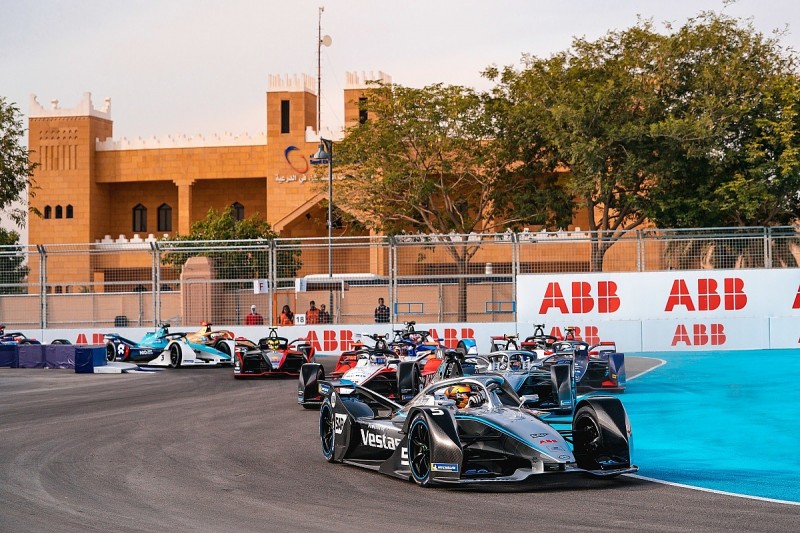 While F1 becomes increasingly occupied with hybrid technology and road relevancy, Formula E has gone quite a few steps further in moving away from the 'more fuel the faster' philosophy. The all-electric series' raison d'etre is to demonstrate how the electrification of cars will lead to a more sustainable and cleaner world.

For the second-generation FE car, produced by McLaren Applied Engineering, the battery has almost twice the amount of storage capacity than the Gen1 car with 54kWh of useable energy. This allows the top speed of the cars to increase to 280km/h but most importantly removes the need for swapping cars mid-race. This inelegant aspect of the Gen1 car attracted ridicule from some areas and showing that electric vehicles can make it through a 45-minute-plus-one-lap race is a much better advertisement for electrification.

As the pressure on the automotive industry to address its environmental damages stacks up, motorsport is being turned to in order to lead the way forwards. It is an exciting time as increasingly it becomes a case of adapt or die - and finding innovative ways to adapt is what motorsport does best.