Lewis Hamilton believes it is “going to be a while” until Mercedes can fight for Formula 1 wins if its France form continues after qualifying over eight-tenths off pole.

Mercedes arrived at Paul Ricard hopeful of taking a step toward front-running rivals Red Bull and Ferrari thanks to the smooth surface and track layout that was tipped to play to the strengths of the W13.

But Mercedes failed to get in the thick of the fight at the front through practice before Hamilton and team-mate George Russell could only manage fourth and sixth place respectively in qualifying.

Hamilton said he felt “really good” on his final lap in Q3, calling it a “beautiful lap”, only to end up 0.893 seconds off Charles Leclerc’s pole position time for Ferrari.

“For whatever reason, we seem to be a lot further off this weekend, but then the whole pack is really,” Hamilton said.

“The top two teams are in their own league really. But considering I missed FP1, which definitely does put you on the back foot, I’m really happy with the progress we made, and everyone back at the factory was working really hard with us to make progress.

“We took a step back today, but into qualifying I managed to turn it up.” 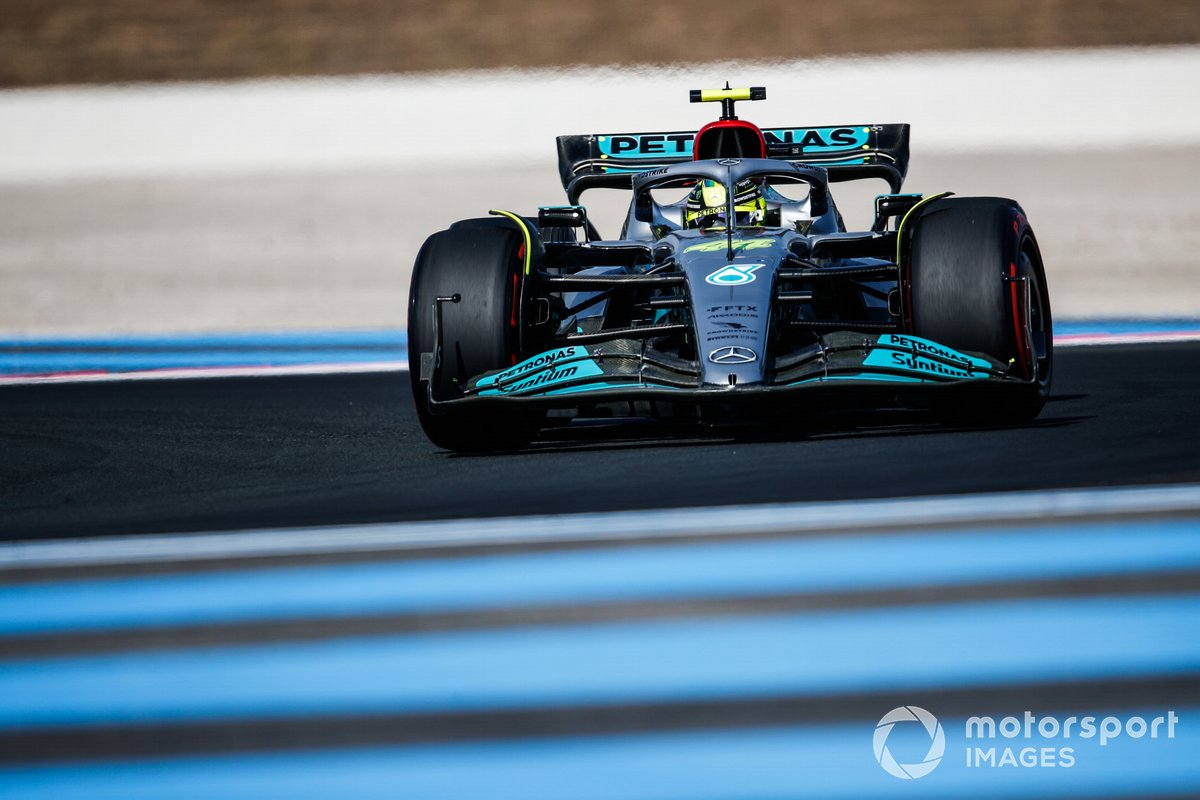 Mercedes is yet to finish a race any higher than third this year, but Hamilton has been adamant the team will be able to get back into the fight for victories before the season is out.

Asked if he could pinpoint when that win may arrive, Hamilton replied: “Honestly, I came here this weekend hoping that we were going to be within three-tenths of them, and we’re a second [off].

“So with the three-tenths that I was hoping for, and if at the next race we can close a couple of tenths, then we’ll be in the fight in Budapest.

“But if it’s anything like this, then it’s going to be a while. But it’s not impossible.”

Hamilton put the gap to Ferrari and Red Bull down to loss on the straights, noting that his first sector time on his final Q3 lap was “just as quick as those guys.”

“And then all through that high-speed section, the last few corners, they’re pulling chunks on us. It’s like they have less drag and more downforce through the corners.”

Mercedes F1 boss Toto Wolff echoed Hamilton’s concerns about how far off a win may be, saying the team had arrived in France “thinking we would race for victory” only to end up “further off than we were before.”

“I hope at the other [tracks] we can have the same swing the other direction,” Wolff said.

“We will find out what happened here and if it's clearly something fundamental, and then [we can] race for victories this year.

“This needs to be still the target because we need direction for next year.”