Hamilton: Why Verstappen battle in 2019 Monaco GP was so tough

Mercedes said Hamilton "saved" the team after it chose to switch him to medium tyres during an early pitstop under the safety car and he had to complete 64 flying laps on that rubber, with his rivals being on the more durable hard compound.

Verstappen was a constant threat and mounted a late assault that resulted in minor contact between the pair, while Hamilton admitted he "touched the barrier a lot" through the race as he kept his car on the edge.

"I was able to get out of the last corner and pull a bit of a gap," Hamilton said.

"I was super slow through Turn 1 but by Turn 3 my right-side tyres were OK and once you got downforce on they would work.

"But then once I got to Turn 4, 5, 6, 7, 8, I had nothing. [I was] moving the brake balance rearwards, engine braking, opening up diffs, trying to get this car turned.

"I could see him barrelling a lot of speed in. Obviously the harder tyre was a lot more resilient. It opened up on his car and I was like, 'OK, hopefully it's going to run out of tyres at some stage, as I am, but it didn't'.

"I kept thinking Turn 6 [the Loews hairpin] is probably where he's going to try to dive up the inside, because I was just waiting to get the car turned.

"So, I was just trying to cover that whole area, tip-toeing and positioning myself so I could get a good exit.

"It was one of the most strategic drives that I think I have ever had to do in terms of finding that balance around the track to try and keep that gap." 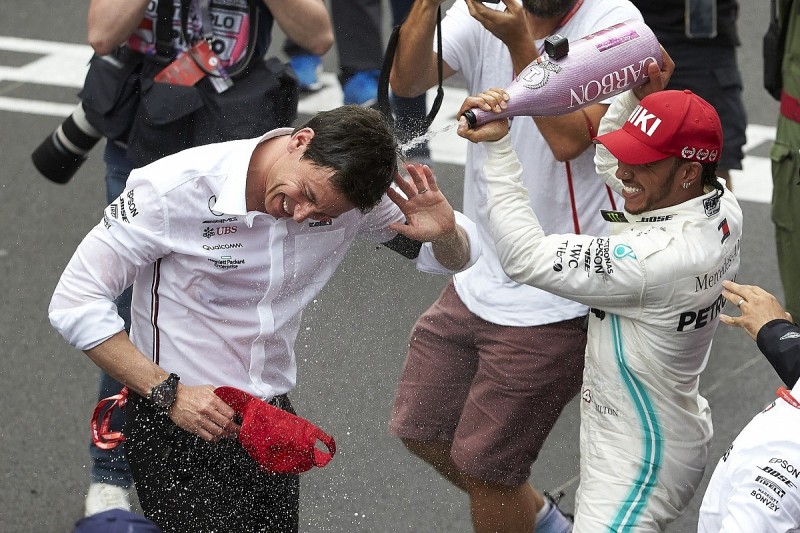 Hamilton reckoned without the safety car he would have run 10 laps longer in his opening stint "and probably cruised to the finish in a more relaxed environment".

After dealing with the on-track pressure from Verstappen after a week in which Mercedes has had to handle the fall-out of Niki Lauda's death, Hamilton said he felt "very, very mixed emotions" at the end of the grand prix.

He told journalists after the race that was like "when the pressure just builds up when you're at work and you probably slap your keyboard".

"It's one of those heated days for me in the car and it was so easy to just burst out," he continued.

"I'm sure I did at some stages, but ultimately [I was] able to release and able to continue [and not] to take it out on the tyres and on the car.

"It was an enjoyable race. It definitely wasn't a boring race for me in the car so I appreciate a tough race.

"As an athlete, you always want the toughest battles."