Lewis Hamilton will continue to wear his LGBTQ+ community-supporting rainbow helmet livery in the final races of Formula 1 2021, which are taking place in Saudi Arabia and Abu Dhabi.

Hamilton unveiled the new design ahead of this weekend’s race in Qatar, where the Losail International Circuit is hosting its first F1 race.

After running the design in practice and qualifying, Hamilton said he intends to use it for the rest of the season – as F1 closes out the 2021 campaign with a trio of races in the Middle East and in countries that have records on human rights that Amnesty International labels “extremely troubling”.

PLUS: Qatar's long-term plans for a "World Cup every single year"

When asked by Autosport if he would be wearing the rainbow design in Saudi Arabia, which follows the Qatar event, Hamilton replied: “I’ll be using the same helmet through probably the last two races after this, or at least next week also.

“But I am not aware of anyone commenting on it or any negative feedback.

“On the back it says, ‘we stand together’ and ‘love is love’, and it’s important for me to represent that community here as I know there are several situations which aren’t perfect and need to be highlighted.

“But I hope that someone reaches out and I would love to know what is happening here and what they’re doing to help support that community more – the LGBTQ+ community. 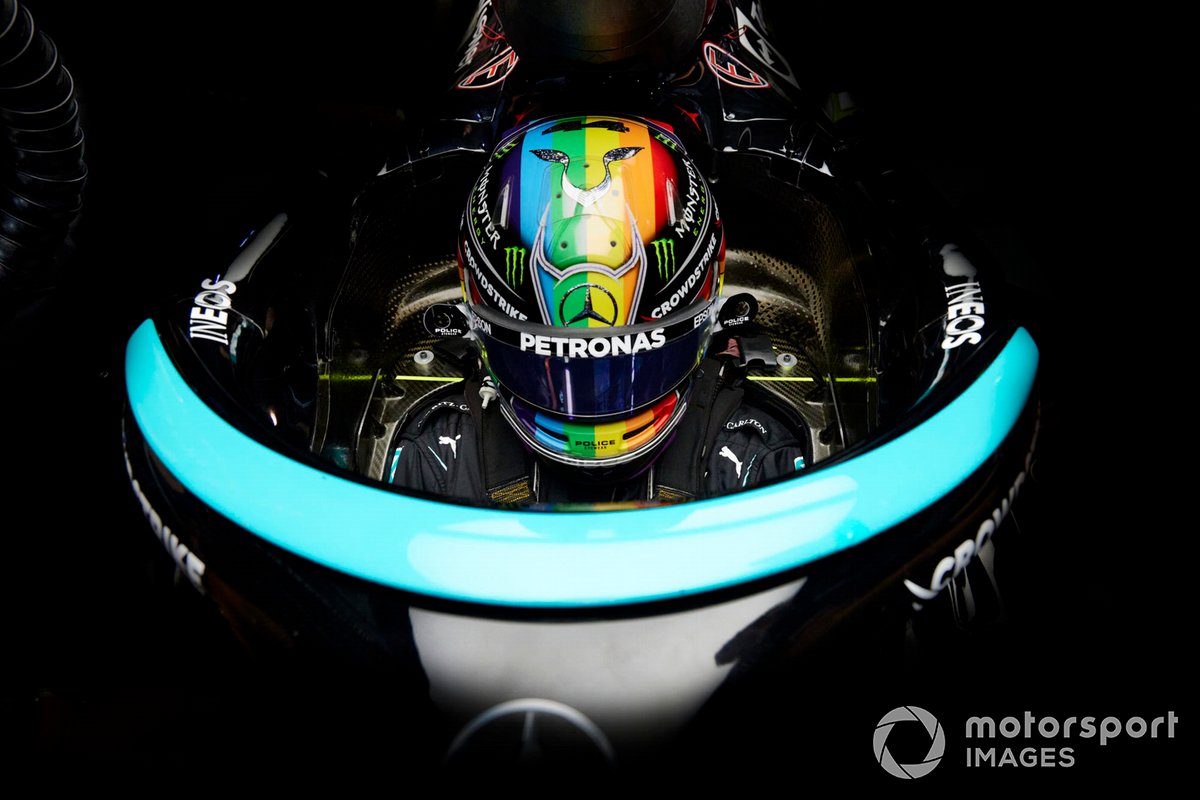 Hamilton said during the pre-event press conference in Qatar that when sports organisations visit countries with poor human rights records, they should highlight problems such as human rights issues.

The Mercedes driver said: “I do think as these sports go to these places, they are duty bound to raise awareness for these issues.

“These places need scrutiny, and it needs the media to speak about these things. Equal rights is a serious issue.”

Earlier in 2021, Aston Martin driver Sebastian Vettel wore a rainbow t-shirt to express is solidarity with the LGBTQ+ community in Hungary and has also altered his helmet livery at events this season to include the rainbow.

The German driver also used the rainbow colours on his helmet in the Turkish GP and the first Bahrain race last season.

Hamilton will start the first Qatar Grand Prix from pole position after out-qualifying title rival Max Verstappen’s Red Bull by a massive 0.455s in the night-time session at the Losail track on Saturday.

Verstappen faces a post-qualifying investigation for appearing to ignore double waved yellow flags as he raced down the main straight to complete his final lap in Q3.

These were flying to cover Pierre Gasly’s stricken AlphaTauri near the pitwall after the Frenchman, who was running ahead of Verstappen and Mercedes’ Valtteri Bottas – also under investigation for a possible yellow flag breach – broke his front wing and picked up a puncture running wide over the kerbs at the exit of the penultimate corner.