Lewis Hamilton says he “learned a lot” about Formula 1 title rival Max Verstappen in their 2021 Spanish Grand Prix battle, adding “perhaps more than all the other races together”.

Hamilton and Verstappen went wheel-to-wheel for the fourth time in four events so far this season, with the Red Bull driver seizing the lead from his Mercedes rival with an aggressive move at the first corner of the Barcelona race.

After he recovered to score a third victory of the season in a charging drive to pull off Mercedes’ audacious two-stop strategy, Hamilton said he had "made sure" to give Verstappen space to avoid a clash in the first corner incident.

He also outlined his thoughts on their fight for the rest of the race.

“I’m continuing to love this battle we are having,” said Hamilton.

“I didn’t know whether we would be able to follow them as closely as we did in the end.

“Obviously, Turn 1, the start was not ideal and we are going to have to review it and see how we can do better in the future.

“But as soon as we got passed in Turn 1, I was like, ‘OK, switch into a different mode’. It was actually a really good day.

“I learned a lot about Max today, perhaps more than all the other races put together.

“This has been a good one in that sense and great, great team work from all of us.

“We were here until late most evenings discussing strategy. We had all the bases covered in that respect.

“Of course, it just meant that I had to do the job on track. Coming back from 20-odd seconds wasn’t easy but I think it was the right one in the end.”

PLUS: How Red Bull's deja vu set Hamilton on the winning path in Spain 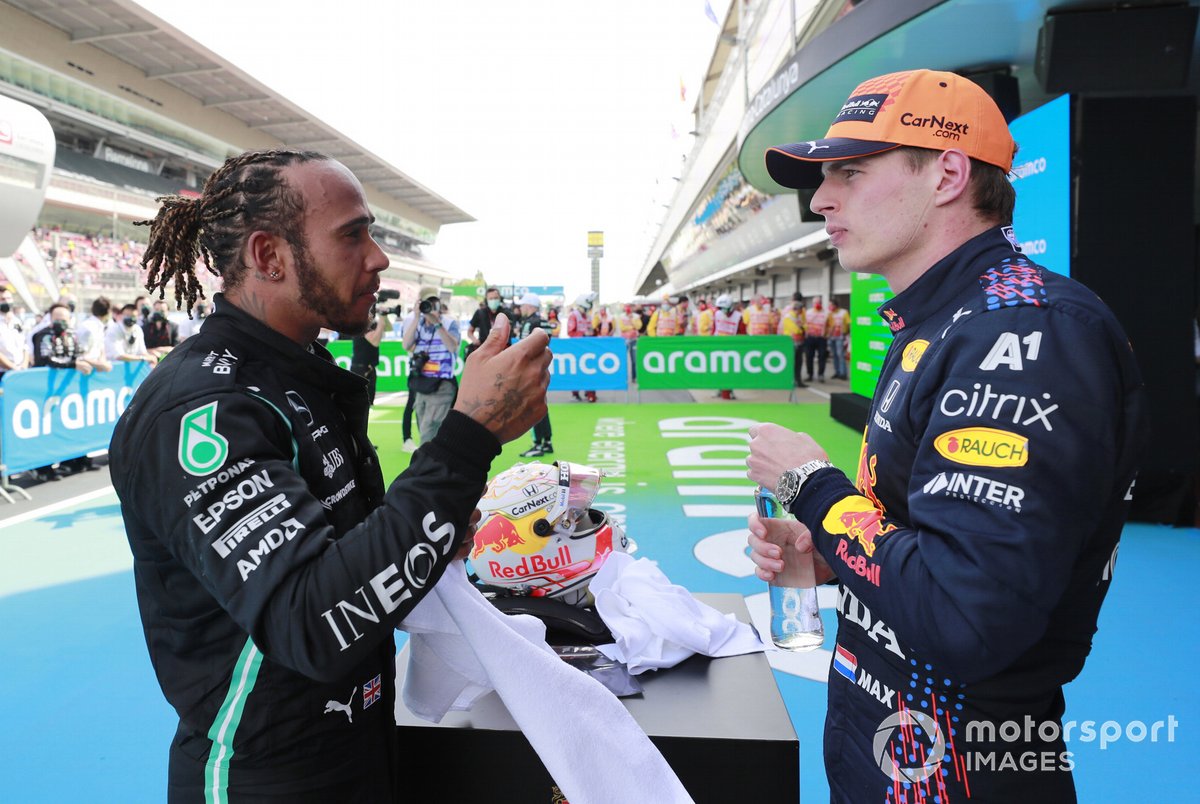 When asked to elaborate on what he meant regarding learning about Verstappen during their contest, Hamilton said: “When you are with people on track you get to see different things and watch closely.

“Obviously I was following relatively closely and I learned a lot about his car and how he uses it. So, it was a good race in that respect.”

Mercedes boss Toto Wolff explained that he had no issue with Verstappen’s aggression at the start of the race.

“Our two tried to help each other off the line,” he said of Hamilton’s decision to stick to the left-hand side of the track after leaving the grid, which gave Verstappen the chance to make his move on the inside of Turn 1.

“That's why you're the loser on the outside, of course.

“The manoeuvre was hard, but not out of the norm. That's why it's ok. They didn't touch each other.

“At least we didn't have any loss of downforce and we didn't lose any part.”