Lewis Hamilton says he "made sure" to give Max Verstappen room when the Red Bull driver attacked him for the lead at Turn 1 of Formula 1's Spanish Grand Prix.

At the start of the race that Hamilton went on to win, the pair came very close to touching as Verstappen aggressively remained on the racing line heading into the second corner, having forced his way to Hamilton's inside on the long run down to Turn 1 at Barcelona.

The near-clash made it four races in a row since the start of the season that the pair have gone wheel-to-wheel, with Verstappen afterwards racing into the lead he would hold for much of the race, until Mercedes' aggressive strategy calls got Hamilton into contention to pass back ahead late in the race with a major tyre-life offset compared to his rival.

When asked to describe his feelings on Verstappen's move by Autosport, Hamilton said: "As we went into Turn 1, I just made sure I gave as much space as I could to Max.

"In my mind, it's always a marathon not a sprint, so I'm just always thinking the long game.

"And, sure, you could be a little bit more aggressive. Do I need too? Well, I'm in the position that I'm in because I don't get too aggressive when I don't need to be."

Hamilton did acknowledge that there was a brief moment on the run from the grid – when Verstappen tucked in to sit behind the Mercedes for a few seconds – where he could have moved across to the inside and "sealed the job there".

He explained: "I knew Valtteri [Bottas] was obviously starting third and the goal was to work as a team, so I stayed to the left.

"I think in hindsight, there could have been a moment, looking back, that when Max moved in behind me for a second [where] I could have pulled across and sealed the job there. But I didn't." 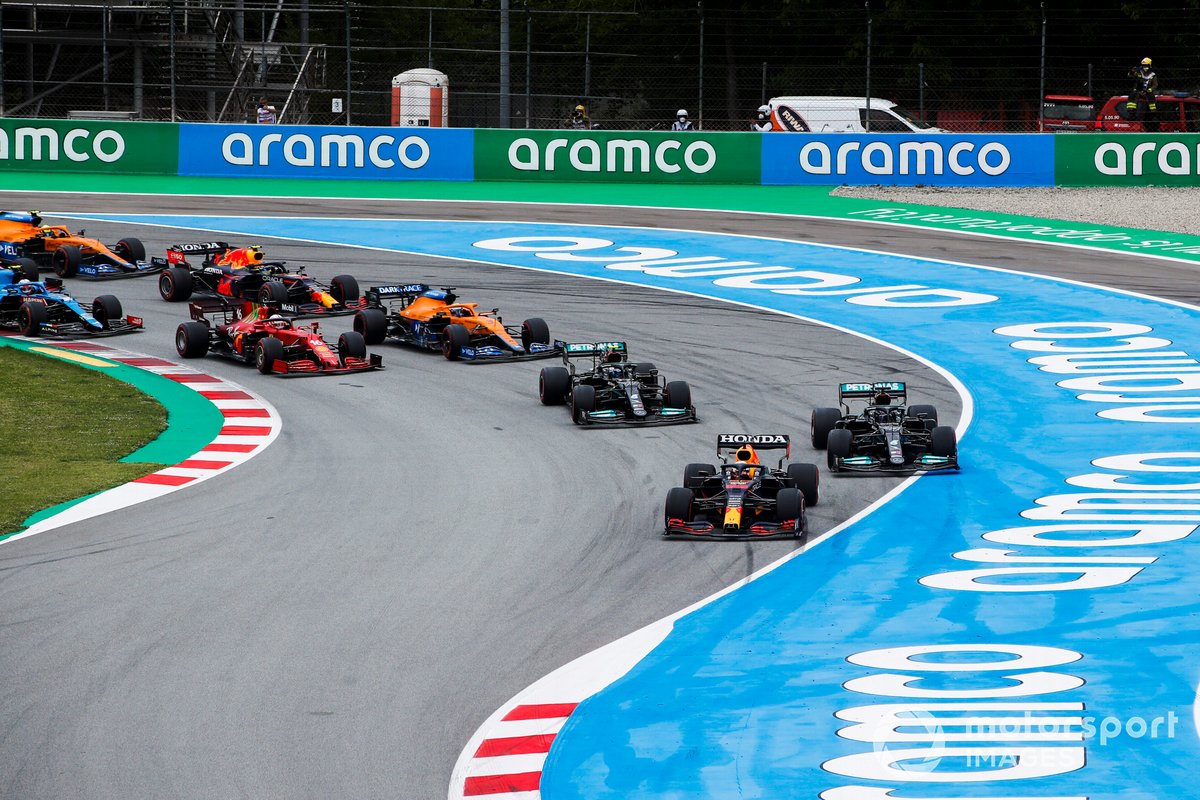 Explaining his view of the Turn 1 incident, Verstappen said: "The launch was good, and I, of course, ran a little bit less wing compared to Mercedes and that helped a bit to get alongside Lewis.

Bottas also spoke about the start of the race alongside Hamilton and Verstappen in the post-event press conference, where he explained how he fell behind Ferrari's Charles Leclerc at Barcelona's famous Turn 3 right-hander – a move that significantly compromised the Finn's chances of staying with the leaders for the rest of the race.

"To be honest, I didn't see Charles in Turn 3," said Bottas. "Once I saw him on the outside going a lot quicker than me then it was too late. I need to review that."

When asked if he had lost momentum behind Hamilton and Verstappen's near touch approaching Turn 2, Bottas replied: "Yeah, for sure, but Turns 1/2 – there's only one line, you can't do much.

"So, I knew I could keep my place there, but then in Turn 3 I was really trying to follow Lewis closely on the inside and I had no chance that Charles was so close and managed to get good grip and line from the outside."