Lewis Hamilton says beating both Ferrari cars was a “huge” result for Mercedes in Hungary given its struggles to compete so far this year in Formula 1.

Mercedes showed signs of its pace in Hungary on Saturday as George Russell scored his maiden F1 pole, while Hamilton was left ruing a DRS issue that he felt denied the team a possible front-row lockout.

Ferrari proved quicker through the first half of the race, allowing Charles Leclerc to leapfrog Russell for the lead, only for its pace to nosedive upon switching Leclerc to hard tyres.

Leclerc ended up finishing sixth, while team-mate Carlos Sainz also faded to fourth in the final stint despite running softs. Sainz crossed the line seven seconds behind Hamilton, who ran the same strategy to second place.

Hamilton said the result was “hugely satisfying” given Mercedes’ struggles this year and his own setbacks in Hungary through practice and qualifying.

“It's a great feeling for us, given the year we've had, and obviously to see the progress that we've started to make,” Hamilton said after the race.

“Last week [in France], just getting the second place last week was huge for us already, and this is now two races in a row that George and I have shared a podium, which is fantastic for the team, points-wise.

“To both finish ahead of the Ferraris is huge for us, given the pace that they've had. And for me, obviously, starting the race in seventh and getting up here is a great recovery.

“I think given the troubles we had through the weekend, that shows that we've got really great pace.” 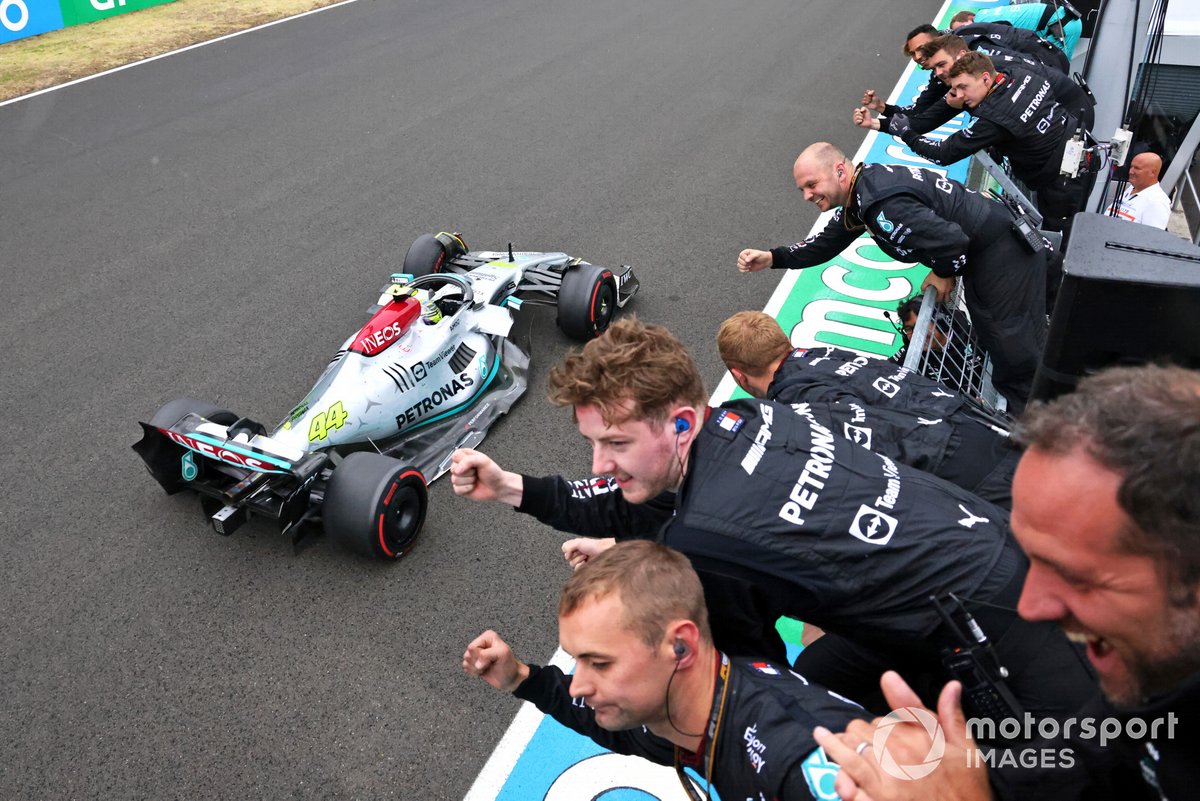 Lewis Hamilton, Mercedes W13 crosses the line to the delight of his team on the pit wall

Mercedes struggled to adjust to the new aerodynamic regulations in place for the 2022 season, causing it to slip behind Red Bull and Ferrari in the F1 pecking order.

The Mercedes W13 car was blighted by porpoising through the early part of the year, but the team has worked hard to curb it and allow its drivers to unlock more performance from the package.

The double podium has also drawn Mercedes to within 30 points of Ferrari in the F1 constructors’ championship, and means it goes into the summer break with as many podiums (11) as Ferrari from the opening 13 races.

Although Russell admitted to some disappointment after slipping from pole to third in the race, he felt the result was fair given Mercedes’ pace and strategy in Hungary.

“Obviously if you start from pole, to finish anything lower than first position, you'll be disappointed with,” Russell said.

“But when you look at everything objectively, I think that was probably a fair result.”