Grosjean stepped up to an F1 race drive with Lotus after winning the 2011 GP2 title, but subsequent champions Davide Valsecchi and Fabio Leimer were unable to follow in his footsteps.

Palmer, who sealed the 2014 crown with victory in the first race of the weekend at Sochi on Saturday, said that he feels ready for the step up to F1 and he is optimistic that it will happen.

"The first priority was to win GP2 and I was always confident that if I did win GP2 I was going to be in Formula 1," he said.

"Now that's done and I am confident. I'm not saying it's going to be easy, but this title is a big help.

"We're going to have to wait for a few weeks and see what happens.

"I feel absolutely ready for it and I'm confident it can happen."

Palmer added that he had had a good feeling about his chances for this season since the latter stages of the 2013 campaign, when he finished the year on a high with Carlin before switching to DAMS for this year.

"We had such a strong end to the year with two wins and nearly a third one at Yas Marina as well," he said.

"And then, we tested with DAMS and they were very keen to sign me for the year.

"Going to a new team, you never know how that's going to pan out. 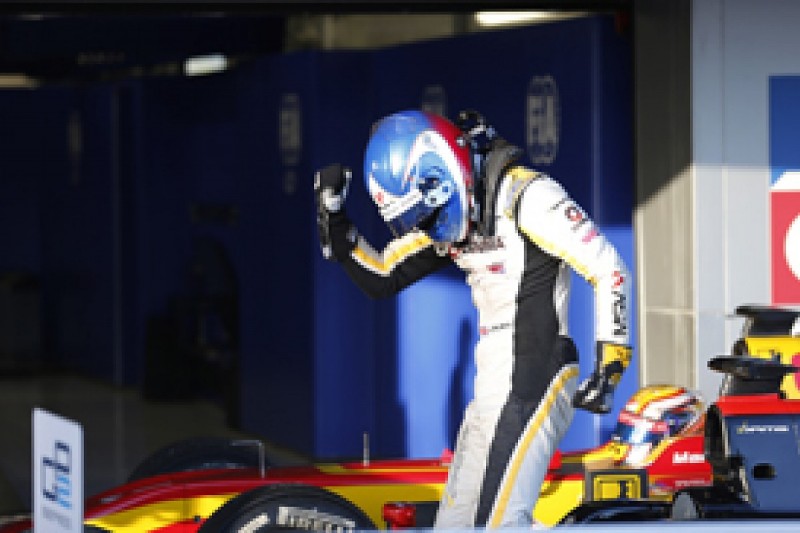 "The first day of testing in Abu Dhabi, we topped and from there we never looked back really."

The 23-year-old said that the title race had been on his mind since the championship resumed after the F1 summer break, and that he could feel the pressure increasing as the chance to seal the crown got closer.

"It's natural to feel a bit of pressure, but it was only after the break that I started to think about it for the first time," he said.

"Of course, you make one mistake and the pressure is on, so you feel the pressure not to make that first mistake.

"There's been more pressure this weekend because this could be the one where it could finally be wrapped up.

"I was a little bit nervous before this race, [but] it didn't really matter in the end because it all came together perfectly."

Palmer is the first British driver to win the GP2 title since Lewis Hamilton in 2006.