A hit from Stroll's Racing Point at the first corner turned Gasly's Toro Rosso, the left-front corner of which then impacted with the other Racing Point of Sergio Perez.

This damaged Gasly's front wing and nosecone and, though he made it back to the pits, he was a lap down by the time the damaged parts had been replaced.

With Gasly out of points contention, McLaren's Carlos Sainz Jr overhauled him for sixth in the drivers' standings by snatching a point on the final lap.

Speaking to French broadcaster Canal+ after the race, Gasly said: "I'm just disgusted with what happened, because we clearly had the potential to keep sixth place and that's it.

"It's annoying when this kind of thing happens."

Gasly also made it clear that he held Stroll responsible, saying: "With him [Stroll] behind, there's a 50-50 chance that things will go wrong.

"It sucks, it really sucks because we had a good pace, we had a good car, we worked well all weekend and when we see where Sainz finishes and what Daniil [Kvyat, who was ninth in the second Toro Rosso] does, there was clearly the potential to make a good result." 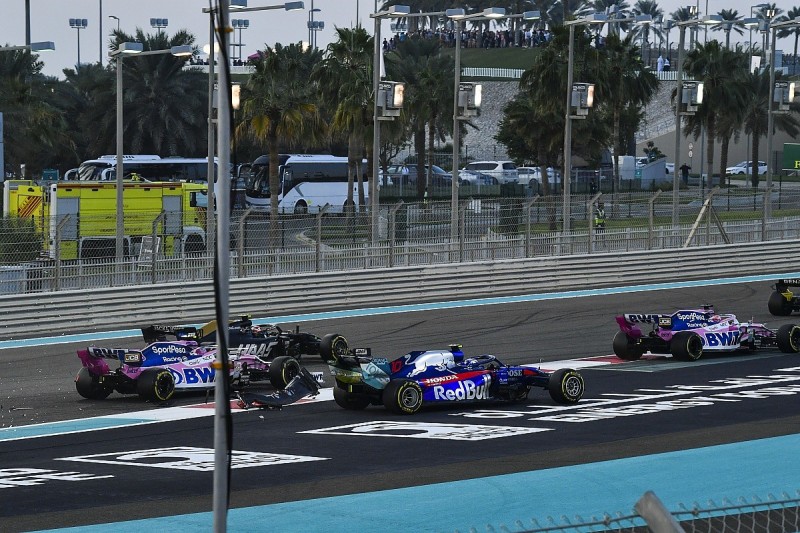 Gasly reiterated his stance in his subsequent media session in English, adding "from what I could see so far, Lance just ruined everything".

"Last race of the season, just to ruin your race with the first-corner incident, it's clearly annoying," he continued.

"It put us one lap down from the first lap, and the whole race [I was] basically praying for a safety car, looking at the standings."

Stroll, who retired with a suspected brake issue after 45 laps, described the contact with Gasly as "a shame".

Gasly, whose second full season in F1 featured a demotion from the main Red Bull squad and a subsequent recovery of form at Toro Rosso that culminated in a first podium at Interlagos, said he was not in the right frame of mind to reflect on his campaign.

"I think it's not really the opportune moment because at the moment I'm upset for the race," he said.