Red Bull picked Hockenheim for tactical penalties for Ricciardo as it knew they would be inevitable at some point after failures earlier in the season and wanted a clear shot at the upcoming Hungaroring race.

But Renault only allowed Red Bull to introduce new examples of three of the possible six elements, fitting a new MGU-K, energy store and control electronics but not the anticipated new V6, turbo and MGU-H.

Taking all six components would have given Red Bull an extra safety net in its pool of engine parts without further penalty when Ricciardo was already destined for the back of the grid.

It was clear before the race that Red Bull management was frustrated by the decision, with team principal Christian Horner telling Autosport it was "a question for Renault" and adding "the normal strategy is to change everything you can".

There is tension between Red Bull and Renault as they approach the end of their relationship, exacerbated by Red Bull's ongoing contractual hold on Carlos Sainz Jr complicating Renault's driver plans for 2019.

Ricciardo was then forced to retire from the German GP with a power unit failure, although exactly what failed, and what elements will not now be reusable, has not been disclosed.

"There was no reason to change the ICE [internal combustion engine], at the time," he told Autosport.

"It's always the same thing, in hindsight after the race, you can always reinvent the world and re-do scenarios, but it's like strategy, wet and dry, it's like lots of things. 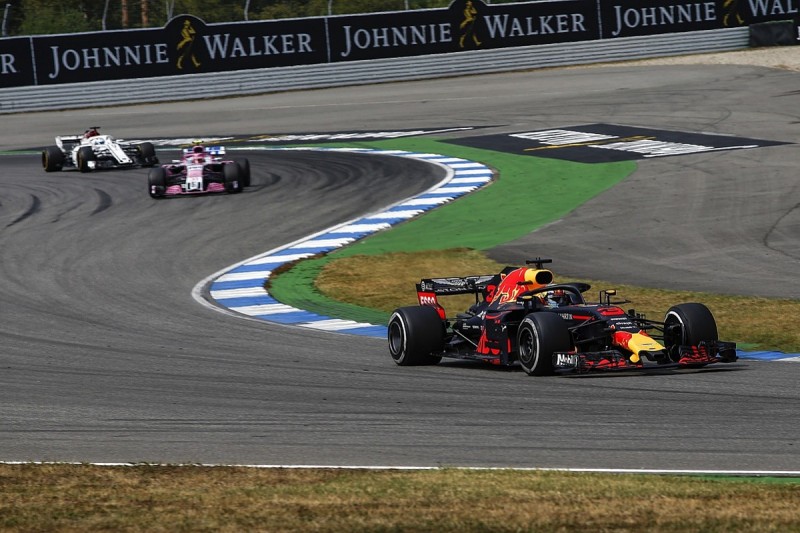 "At the time, when we had to make a decision, with the information we had at the time, there was absolutely no reason [to change more parts].

"Engine failure can happen at any time, even with a new engine, unfortunately, it can happen, as happened in the past.

"There was no more certainty with a new engine than an old engine."

Abiteboul denied that the decision not to give Ricciardo new elements was due to a lack of availability.

"There is no situation with availability," he said. "First we are really focused on 'spec C', and we are in between two specs and it's better to try and wait for spec C availability.

He added that the introduction of the spec C Renault engine "may not be at the same time for everyone", saying "we have to see what's best, when they are available. The earliest will be Spa."