F1 will return to France after a 10-year hiatus in 2018, with the June 24 race marking the first leg of the championship's first triple header that also comprises the Austrian and British Grands Prix.

Organisers have chosen the full 3.6-mile circuit configuration for the race but with a chicane to break-up the long Mistral Straight.

"The FIA did some research and the speed before the chicane will be 343km/h [213mph], so the chicane is useful," French GP managing director Gilles Dufeigneux told Autosport.

"The chicane has been added to prevent the engines from running at full speed on a straight uphill line of 1.8km.

"We also wanted to facilitate the creation of an additional overtaking area.

"It will provide three straight lines where the cars can go at full speed before two massive decelerations - Turn 1 and Turn 8 and a flat out turn - Signes.

"According to the FIA, cars will reach 343km/h before the chicane and 343km/h at the apex of Signes.

"The drivers have told us the chicane will probably be an opportunity for non-DRS overtakes during the race.

"We presented the new configuration of the circuit during the Austrian Grand Prix weekend to several drivers including Lewis Hamilton, Sebastian Vettel and Fernando Alonso.

"They liked it and said the 5.8km configuration was a nice option."

Paul Ricard, which has a five-year deal to run the event, last hosted the French Grand Prix in 1990 before Magny Cours took over until 2008. 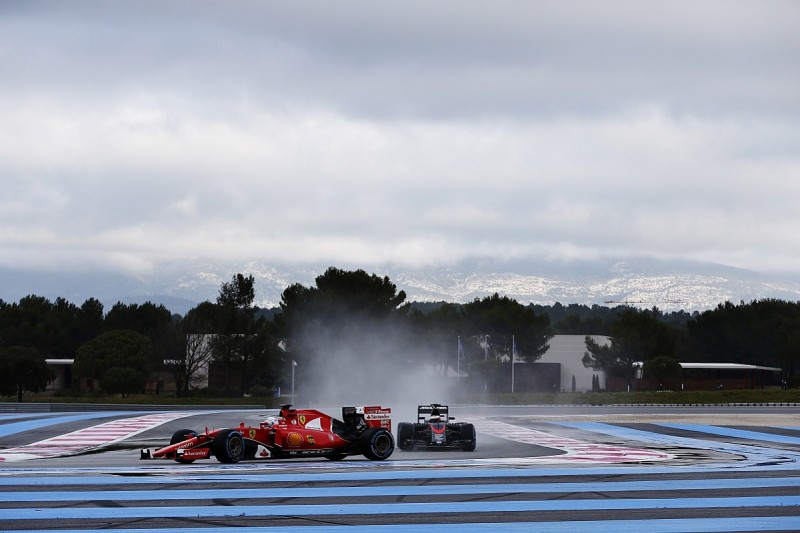 Contemporary F1 cars have tested at the venue this year, while last year Ferrari, Red Bull and McLaren took part in a wet-weather tyre test in January.

As Paul Ricard is mainly used for testing, the biggest investment required ahead of the race will be on the grandstands.

"With respect to the circuit itself, minor changes [will be made]," added Arnaud Pericard, who is part of the French GP organisation team.

"The FIA had an inspection visit a couple of months ago and it's just minor changes with respect to the kerbs, which we'll do this winter.

"The circuit is already F1 graded for a long time, so it's not massive change.

"The most important investment will be the stands, they are a big deal."

Organisers are working towards a "conservative" capacity of between 60,000-65,000 for race day.